Pico's Mex-Mex On Kirby Is Estimated to Open Soon

Share All sharing options for: Pico's Mex-Mex On Kirby Is Estimated to Open Soon

After having housed Tex-Mex staple Ninfa's and most recently, the controversial and short-lived Maggie Rita's, the space at Kirby and Richmond right across from Pappasito's Cantina will become the new location of Pico's Mex-Mex at the end of this month. Chef/owner Arnaldo Richards and his wife Janice will oversee operations and daughter Monica Richards will be the beverage director. Together, they've made the original Pico's on Bellaire Boulevard a 30-year success, garnering critical and popular acclaim for its fresh Mexican fare and famously strong margaritas. The family has already completely renovated the massive Upper Kirby building's interior from the ground up, including an additional patio on the south side of the building. Once complete, the entire space should seat about 300 guests, up from 240.

"This area calls for something like this," Arnaldo said. When asked why he chose to open it directly across from Pappasito's, in a space where other Mexican-influenced cuisine has failed, he explains that the food at Pico's is completely different. "I feel like going to Pappasito's— you can come the next night here and then go to Carrabba's and you'll have three different experiences. We're still going to have fajitas, it's still a popular dish in Mexico in certain restaurants—not in a restaurant with this décor— it's almost like a necessity because sometimes we'll have a table of five people and there are some people that will refuse to eat the mole or the cochinita pibil or the duck pipian, some of the really authentic dishes, and they still want to have their Tex-Mex," Arnaldo said. "So we'll carry the fajitas and have three Tex-Mex dishes that we always have, and the rest of it is going to be unique, really authentic Mexican food." 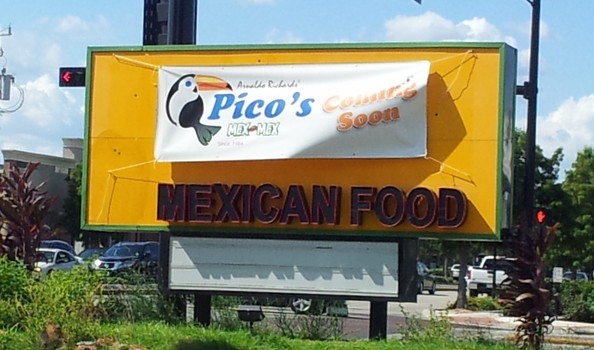 Arnaldo hopes to bring all of the Mexican regions to the forefront of the Inner Loop dining scene. "What you see in restaurants Tila's and Hugo's, we've been doing that for 30 years—we basically started showing people what Mexican food is really about," Arnaldo said, adding that his family has been in the restaurant industry for 53 years now. This location will feature a similar menu to the original location's—the building on Bellaire will eventually be converted into a reception hall space—but will be expanded to include more dishes, and more seafood. In addition to the seafood dishes from the original menu, the new list of options will include what Arnaldo explains is a harder-to-source Mexican fish boquinete (hog fish). As for the drinks, his daughter Monica will implement a full bar that focuses on sotol and mezcal, not including the private dining room's locker program. A wall of lockers will be reserved for private groups, and reservations will come in the form of $1,800, $3,600 and $5,000 "yearly consumption" contracts where families and high-end tequila companies can safely store their pricey spirits. Arnaldo said he's already sold 10 of the $5,000 contracts.

Arnaldo is projecting a Feb. 19 opening, but notes that there have already been a number of delays, mostly due to the city's notoriously difficult permitting process. But he's excited to open and to show off the brand new interior. "What used to be Ninfa's is nothing, we gutted out the place and, with the frame, created a new restaurant," he said. "I'm very proud of it."
· Picos Mex-Mex [-EHOU-]
· All Other Coming Attractions [-EHOU-]