Perhaps taking a note from past downtown establishments that closed just months after opening, chef Mark Latigue is making sure to "take care of his block" when he opens El Gallo Rojo at 917 Franklin. Known for his work at Arena Theater and for his 20-year-old catering business, Latigue also recently began operating a small eatery inside the City of Houston's permitting office. That led him to find a culinary niche worth filling and the space in which to open his first public establishment. Latigue will be serving Creole, Cuban and Caribbean food in the space formerly occupied by Red Lantern. "My mom is Cuban and my dad is Creole, he's from Louisiana," Latigue says. "If you take a look at the part of world we're in, Cuba's [right off] the Gulf, and at the south end of Cuba is the Caribbean Sea, so this is Gulf Coast cooking: It's the same body of water."

Catering to downtown's busy day-time audience, he plans on offering a cafeteria-style area where locals can head in and out for a quick but hearty breakfast or lunch. Think Cuban fried rice; jerk chicken served with peas and rice; and Cuban arroz con pollo served with black beans. Apart from this buffet-style line, Latigue also plans on incorporating a sit-down dining area and dessert area. He plans on trying out different seating configurations this weekend, when construction at the 1,900-square-foot space will be complete. After that, he will open softly on Valentine's Day and continue service until the grand opening on March 2. Look for the sign reading "Mark Latigue Catering Company" until it phases into the eatery, when it will read "El Gallo Rojo" and have the red rooster as its logo. Once open, Latigue hopes to incorporate late-night hours, eventually hoping to be open 24 hours a day on weekends. But his plan for now is to focus on the downtown crowd immediately around him who want a go-to breakfast and lunch place. Latigue says, "Why not have gumbo for breakfast?" 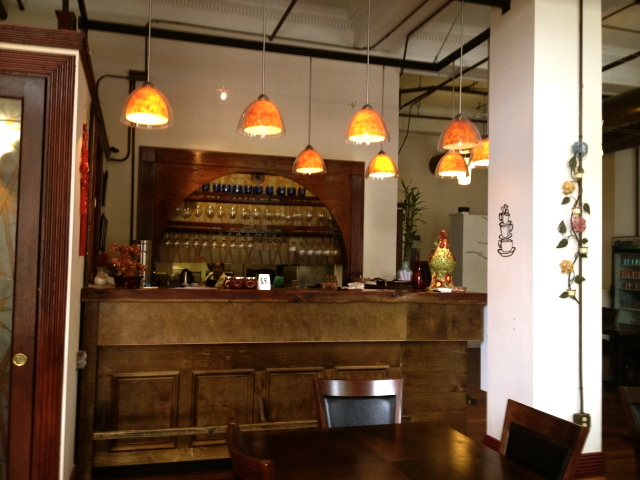 Latigue is planning some minor renovations to the interior, with a kitchen overhaul.