Former Batanga Chef on His New Project and Future Plans

Share All sharing options for: Former Batanga Chef on His New Project and Future Plans

The chef-driven pop-ups trend continues with a familiar name. After moving here from Atlanta to help Brian Fasthoff and Hank Fasthoff open Batanga downtown, chef Ben McPherson found that he wanted to launch his own Houston-based concept. Upon announcing his departure from the downtown Latin American tapas place in December, he teamed up with co-chef Matt Wommack and began planning The Bull & The Pearl, a series of pop-ups and reservation-only dinner services that will begin this month. This series will offer a preview of what McPherson will be serving at his upcoming brick-and-mortar establishment. It's also helping him keep locals interested in his food while he gathers investors and finds the best space to house his restaurant. For the time being, he's keeping any prospective locations under wraps, but he states that he has no regrets about settling in here. "I am happy to call Houston my new home," McPherson tells Eater. "I also grew up in a small Gulf Coast town and love being close to the water again. That murky Gulf water runs through my veins."

As for the supper club concept, a description on the official site says that locals will make reservations to the dinner and the exact location will be disclosed only a day before the event. It sounds like a Fight-Club-style arrangement, although they liken it to a rave. However you see it, it's a fun way for McPherson to introduce locals his new menu. "We try not to take ourselves too seriously, meaning we do not want our guests to come to have dinner with us as much as have an entertaining evening with us," McPherson explains. "Our guests should have just as much fun as we are having in the kitchen." These private dinner parties will be limited to groups of 30 to 40 guests who will arrive to a cocktail hour with a guest bartender and a hors d'oeuvres — the first will be a seafood tower — before sitting down to a four-course meal. These super-secret dinners will be held monthly, and the pop-up events will be held more often and at rotating venues. 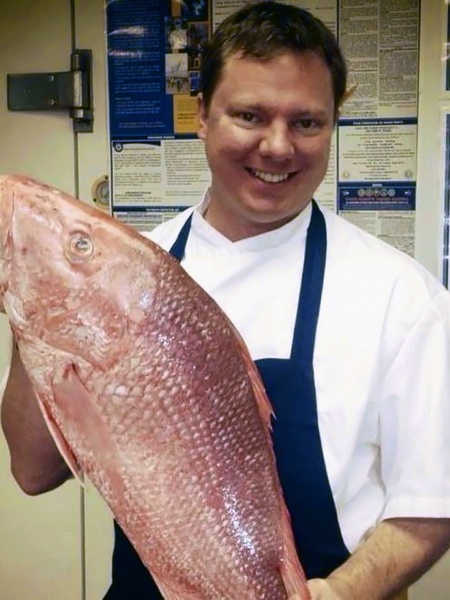 The first of the casual pop-ups will be at Good Dog on March 24 from 6 to 10 p.m. McPherson will focus on Gulf seafood and Texas-ranched beef in the form of elevated southern dishes. "We will be utilizing the best ingredients we can source locally, regionally and internationally with a focus on simplicity," McPherson tells Eater. The pop-up will consist of five à la carte options, from bone marrow butter and salsa verde on baked oysters, to crawfish pie, golden beet cappelletti pasta to a celeriac horseradish salad and Blessington Farms strawberries-topped buttermilk biscuit: It's going to be a Southern-style collection of creative indulgences.
· The Bull & The Pearl [Twitter]
· All Other Coming Attractions [-EHOU-]