Share All sharing options for: Fuzzy Hajjar on 30 Years of Fuzzy's Pizza

When Fuzzy Hajjar came to this country from Syria in 1975, he arrived with a plane ticket and $50 in his pocket. He landed in Chicago, where he worked managing restaurants. He migrated to Houston in the early 1980s to manage Spanky's Pizza, which then had multiple outlets in the Bayou City's Pizza. "But I always dreamed of opening my own place," he says. And that's exactly what he did, in 1984, opening the original Fuzzy's Pizza on Antoine by I-10. "Oh, everyone said, don't do it. The economy is bad. You'll regret it. But I knew I could make it happen." He says it took him five years to "stand on my feet," and he never regretted the decision. The biggest challenge he faced at the outset was getting people to realize the name Fuzzy's meant great. "We're not on billboards, not advertising on TV," he explains. "We weren't Domino's or Pizza Hut. People didn't know who Fuzzy was." 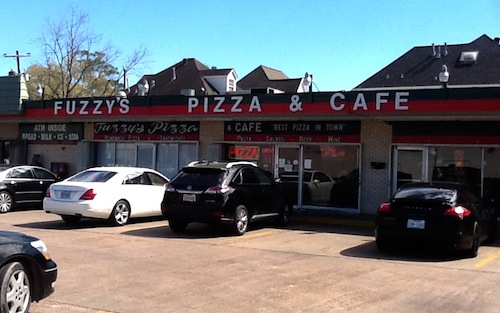 But when they had his pizza, they kept coming back. Even the owners of Spanky's, who now have only one pizzeria, have been supportive patrons, and Fuzzy appreciates their business. His most famous patron, by far, though, is former President George H.W. Bush. "The first time he was going to come in, it was strange," Fuzzy recalls. "The Secret Service showed up and they were looking at everything, around the building, they almost went up on the roof, they wanted to know who Fuzzy was. And when they told me the president was coming for lunch the next day, I was shocked."

Not nearly as shocked as he was to discover that "41" really loved his pizza – and kept coming back. Over the years, he's brought along with him everyone from the owner of the Houston Texans to reporters from USA Today. Fuzzy even named a pizza after the president, The George Bush Pizza, with cheese, pepperoni, Italian sausage, Canadian bacon, onion, green peppers, black olives and artichoke hearts. There's one named for Barbara Bush, too, with toppings of spinach, mushrooms, garlic, artichokes and baked chicken. "The president tells me, 'Fuzzy, you're the American Dream,'" he says. "I am so honored. I mean, here I am, an immigrant from Syria and the president of the whole country is eating in my restaurant." He laughs. "It's great. And you know what? Whenever he goes out of town, when he comes back? His first stop is here."