Share All sharing options for: Pizaro's Owner Bill Hutchinson on His Famous Pizza

It all started because Bill Hutchinson wanted a brick oven. "My wife and I watched all those Food Network shows," he says. "I mean, we love Bobby Flay. And we thought it would be cool to have a brick oven to cook in." Turns out, the more the commercial sales executive looked into it, the only reason to have a brick oven was to make pizza. That discovery led Hutchinson to another: if you had a brick oven and you made pizza in it, you could go a step further and make Neapolitan pizza in it. And, Hutchinson realized, if he were going to that, he may as go all in and open a pizza shop – and get certified as a pizzaiolo while he was at it.

So, that's what he did. Becoming a certified pizzaiolo means receiving a certificate from Naples, demonstrating that you're familiar with – and have taken training on – making authentic Neapolitan methods. Hutchinson took an intensive, two-week course and, certificate in hand, he and his family opened Pizaro's Pizza Napoletana on Houston's west side in 2011. This fall, they're moving into Montrose. 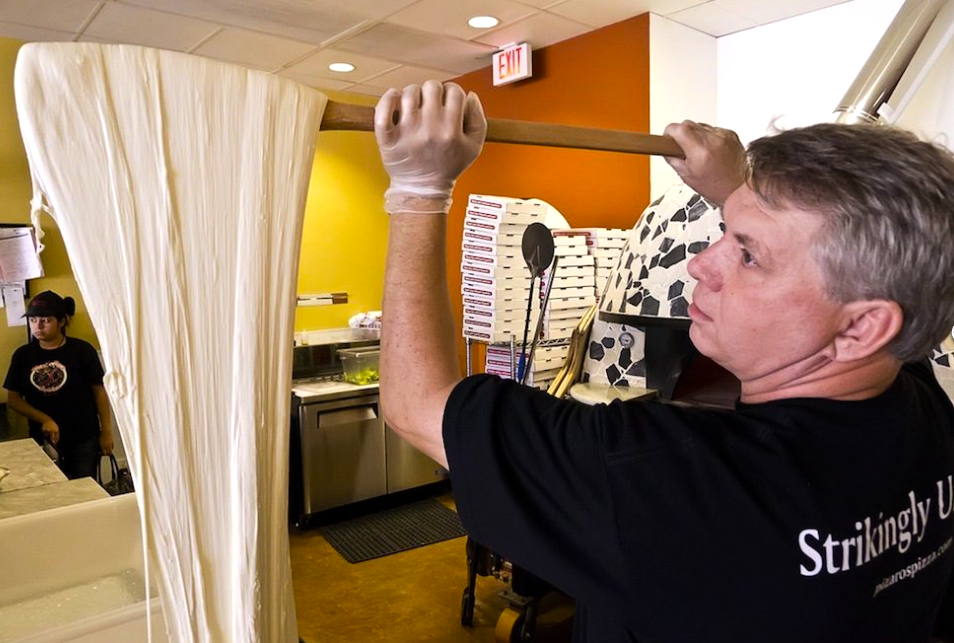 "All our customers have been clamoring for us to come inside the Loop," he says. "And we think the neighborhood there is really ready for what we do." He says the new space will have 3,100 square feet and two brick ovens for crafting their signature pizzas. It will still be BYOB, and Hutchinson promises the Montrose outpost will have the same passionate attention to detail in terms of pizza crafting.

"We make 14 different pizzas," he says. "My favorite is the Margherita. And we do a pizza of the day – one time we did duck. It was great!" Hutchinson loves being in the store early in the morning, where he sees to making the pizza dough and the cheese – all the base ingredients, including the sauce, are made in house – and then turns the ovens on to warm slowly, so they're ready by the lunch rush. By the time he goes home, about 12 hours later, he says he's a happy man. "Who ever knew you could mix flour and water and salt and yeast and create something so exhilarating?" he muses. "But my gosh, people get so excited over well-cooked food. We love that and being able to be part of that experience. We're so looking forward to moving into Montrose and doing even more."