When Underbelly opened in March 2012, it was one of the most anticipated restaurant launches that year. In the 24 months since, its chef and the restaurant itself have racked up a number of accolades from everyone from Food and Wine to the James Beard Foundation. Chef and co-owner Chris Shepherd is at the helm of this restaurant, which is a part of the Clumsy Butcher portfolio — a collection of establishments including The Hay Merchant, The Pastry War and Anvil Bar & Refuge, among others. Here, the popular chef muses on two years in business, what "whole animal" really means, and how someone should've told him there would be so many meetings.

How has your second year been different from your first year?
The whole experience has been amazing. And, in our second year, Underbelly is really coming into our own, and we're pushing harder every day to be better. The way we're set up, we change up the menu every day, so it's a challenge. But it's a testament to our dedicated staff that it happens. It's been fun.

You've always said that part of what you wanted when you opened Underbelly was to be able to serve great food and educate people about it. What does that mean for you?
It's all about education. And it's about learning and listening. I learn every day from my cooks and my team, and they learn from me. We learn from our vendors.

Your concept has always been to use the whole animal, "tip to tail" at Underbelly. How have you helped people understand what you mean by that, and what does it look like from a practical standpoint?
Yeah, a lot of people come in and think it's going to be all these organ meats, and we do that. But, there's only so much organ meat in an animal, you know? A two-pound heart isn't going to go very far. For me, using the whole animal is about respecting the animal. So, take a cow for instance. Like, you go into another restaurant and you order a tenderloin. That represents about 14 pounds of a 1,000-pound animal. So, what do you do with the rest? Where does it go? We wanted to use the whole thing. So we butcher in house and we use the sirloin, the roast, the shank. We break down the bones and make stock. Our goal was always to be able to make sure we could buy a whole animal, break it down, process it and use it. And we do that with everything. We fish, we'll scale them, make the fillets, use the collars, scrape the bones and use the rest for stock. 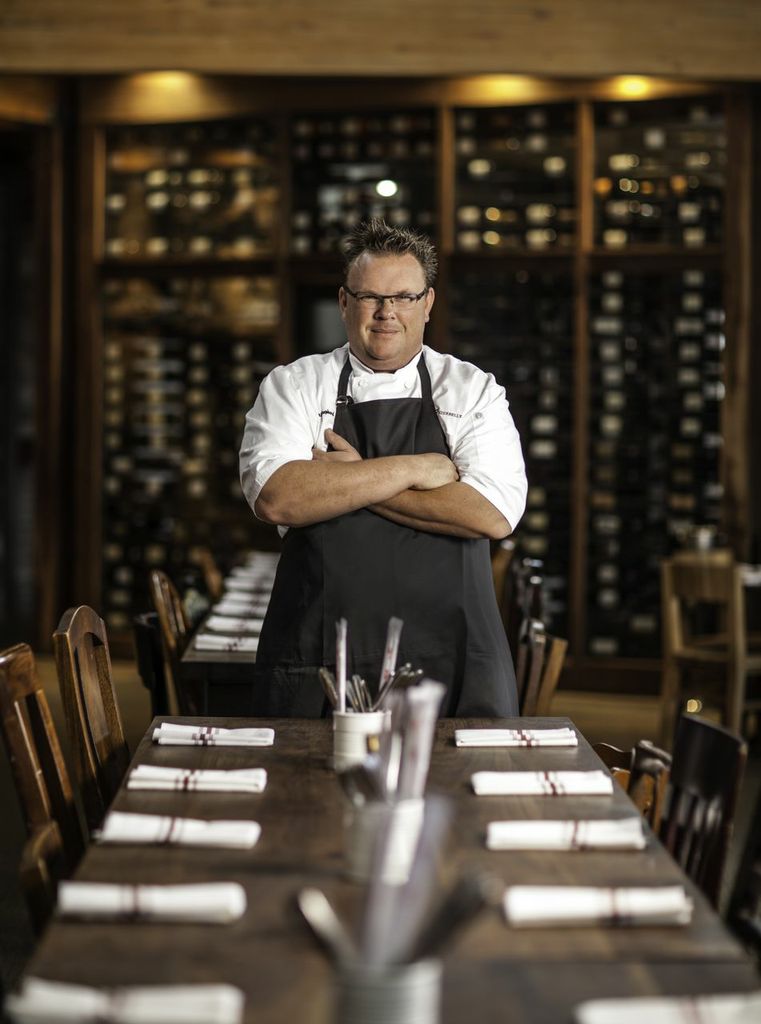 So, how often does it happen that someone comes in and loves something on the menu, and says, "I want more of that" and there isn't more?
It happens all the time. I'll hear, "I love that dish! When will it be back on the menu?" And I'll have to say, "September, because that's when that dish is in season, so try this in the meantime." We are trying to be more consistent with steaks and chops, though. For example, we'll buy the whole pig and process it, so we've been working on perfecting the timing on our pork chops, which have been really popular. We cut them, brine them, cure them for six days, so we do our best to time it so they're always available on Thursday. We do the same sort of thing with ribeye, making sure it's on the menu on Friday and Saturday. But, when we're out of those things, they don't come back for another week.

You're one of several chefs who are dedicated to using local growers and you frequent the farmer's markets. Why is this important to you, and what does it mean for your diners?
We've gotten away from eating local as a society. And, for me, the farmer's market is like the last great town hall, or it's like Main Street, you know? You go there, you see the same people, you know how they are and what they're doing. Part of what we want to teach people is about seasonality. I can buy something that's not in season. But then, it goes from the field to a truck to a plane and it's a whole two weeks before it shows up on my table and so much of the freshness and flavor are gone. With what I get at the farmer's market or from the farmers who deliver to our door, those vegetables were in the ground that morning. And you can't beat that for freshness and flavor. I shoot for sourcing everything, with very few exceptions, within 150 miles, all the proteins, all the vegetables. Citrus is one exception. I need to have citrus every day, and I buy Meyer lemons locally when they're in season, but I'll get lemons and limes from other places when they aren't because we need those for what we do.

It seems like the last two years have been a whirlwind. Is that true and what happens next?
It was a whirlwind. It still is. And we know we're not perfect, I'll never claim that we are. But we're wanting to tell the story of Houston food through our eyes, and we'll continue doing that. I'm not thinking I'm going to go to New York or L.A. and do Underbelly there. No, this is about Houston, and about the food we can get here, about showing that we have great local producers, that the Gulf is our back door and to help people understand all this great food is being made here, it's happening here, and it's a testament to our city that our diners embrace this.

Tell me one thing you wish someone had told you before you opened Underbelly.
Well, I knew the work that was going to be involved with opening my own place, because I'd done openings with other people before. So, the hours were something I think I was ready for. But I wish someone had said, "You'll do a lot of meetings." I don't think I was prepared for that, being here for this or that event, or meeting with staff and vendors, and it's all part of it. And I love that I get to be there every day and be part of this.

What's your favorite dish on the menu?
The goat dumplings. It's a great representation of Korean food, with great flavor, and texture. I probably eat them every day. And it's on the menu every day. I don't get tired of it. I should, but it makes me happy every day.

What do you want your diners to feel about their experience at Underbelly?
When you come in, I want you to feel comfortable. Come in and have a good time, but experience the flavors we have, the ways we've been inspired by other cuisines. And then, go out and explore. Go to Hillcroft and find little ethnic spots that serve those flavors. I personally love it when someone says to me, "I love this dish. How can I try more of what that is." All of us here love this city and the diversity in it, and we really enjoy getting out and trying new things, sitting around until three in the morning, looking at cookbooks, talking about how to make new things. There's so much here in Houston, so much for us to wrap our arms around. It's amazing to be part of that.