Jonathan Jones Out at Monarch Bistro; Jeff Axline In

Share All sharing options for: Jonathan Jones Out at Monarch Bistro; Jeff Axline In

The Museum District is home to a host of recent chef shuffles. Jonathan Jones, formerly of Beaver's and Concepción , will be leaving Hotel ZaZa's Monarch Bistro in a few weeks, according to CultureMap. Jones gained momentum in Houston because of his hearty comfort food and exotic dishes, burgers and then Latin fare at late El Xuco Xicana, before taking a turn toward more refined dining by joining the team at Hotel ZaZa's Monarch Bistro last year. An Eater tipster tells us that Jones will be heading to El Big Bad, which recently lost its exec chef Ben Rabbani. Although El Big Bad co-owner Lea McKinney tells Eater that they have yet to hire anyone.

Jeff Axline, who has been the banquet chef at Hotel ZaZa since late last summer, will replace Jones as executive chef of the hotel and Monarch Bistro. Axline was most recently in charge of the kitchen at Brooklyn Athletic Club, where some of his signature dishes are still on offer. "Jeff has an amazing reputation in Houston and has cooked incredibly for some of the highest profile galas and weddings in Houston. We have no doubt he will continue building on Hotel ZaZa's great culinary foundation garnering further exposure for Monarch with hotels guests and locals alike," executive vice president for Z Resorts Matthew Nuss said in a statement. 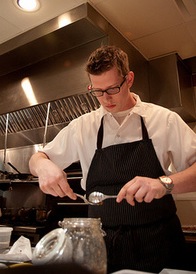 Meanwhile, the Museum District is seeing another big chef shuffle. Justin Basye, formerly of now-defunct Stella Sola and the popular pop-up dinner series Les Sauvages, will be heading the kitchen at an eatery inside Balcor Hospitality's upcoming mixed-use complex, according to the Chron. Basye, who's kept a low profile at Pappas Restaurant Group recently, will become the executive chef at the Museum Park Cafe. Basye will also do menu consulting for that cafe's sibling coffee shop and wine bar, Bosta. Balcor Hospitality's new development will feature medical offices in the top floors and restaurants and cafes on the ground floor, including these upcoming concepts. Basye told Alison Cook that "he'll be working with local and American salumi and cheese purveyors, as well as making a point of including small American artisanal wine and beer makers on the menus."
· Noted chef Justin Basye returns to the restaurant scene with his own museum-district kitchen [Houston Chronicle]
· High-profile chef suddenly resigns from a hot hotel restaurant — and seems confused about the whole thing [CM]
· All Other Chef Shuffles [-EHOU-]