Share All sharing options for: Jose Hernandez IN at Upcoming Radio Milano

Soon after an acrimonious departure from La Balance Cuisine in Katy, high-profile chef Jose Hernandez rejoined the team at Étoile Cuisine et Bar for a temporary stint as executive sous chef. Without a moment to rest, he's already made the move to Radio Milano—an upcoming concept that's expected to debut in the space that once housed Bistro Alex. When it launches in May, Hernandez he will lead the kitchen as executive chef, and Pete Contaldi, formerly of Pappas Bros. Steakhouse, will be the general manager. For now, the restaurant is still operating as The Bistro with The Bistro menu until the rebrand takes place, and Hernandez has been quietly working there for about a month, in anticipation of Radio Milano's unveiling. Hernandez tells Eater that they will offer contemporary Italian fare, and that he's already been working on recipe development.

"It's fun; whenever I take a job I take it very seriously," he explains. "It's more than just supporting a chef; [this time] I'll have menu control. My hours are the same: 12 to 15 hours a day and five to seven days a week." However, the chef says that he tries to balance his work and leisure time. "Obviously I get tired, and you have to make time for family," Hernandez tells Eater. "But you can ask [chef Philippe Schmit] or [chef Philippe Verpiand], the responsibility is always there." Hernandez and Schmit worked together at Orsay in New York City before they both moved to Houston for the late Bistro Moderne. The chef sounded excited about Radio Milano and about the idea of launching a new place. 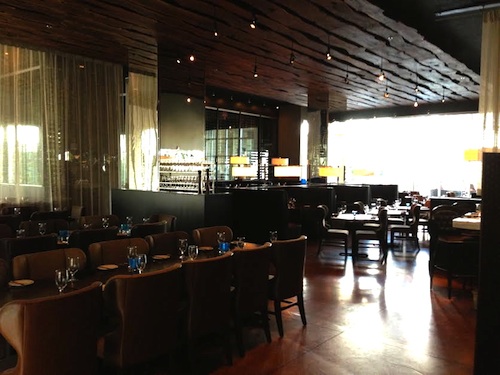 As for this upcoming concept, the RK Group's Eric Nelson told Eater back in January that Radio Milano (upstairs) and Radio Bar (downstairs) are being introduced to CityCentre as a way of attracting a broader audience. "We're working with the hotel to bring a more upbeat restaurant to the area," representative Eric Nelson told Eater. "We're going to offer something different on Thursday, Friday, and Saturday nights. We're doing a late-night concept with a cover charge. At 10 p.m. we will charge a cover charge for the restaurant, music turns up, lights go down, guests sit down, and we start flooding the restaurant with small plate service bringing random items to the table giving guests new experiences." The bar will remain open until 1 a.m. serving craft cocktails and high-end spirits.
· All Other Coming Attractions [-EHOU-]
· All Other Chef Shuffles [-EHOU-]
Chef Jose Hernandez pictured here at Philippe [Debora Smail/Official Site]