Russell Thoede on One Month at Lei Low Bar

Share All sharing options for: Russell Thoede on One Month at Lei Low Bar

Down House alumnus Russell Thoede and his wife Elizabeth Thoede opened Lei Low, their Tiki bar, at the tail end of February. A month in, they've learned how much people love their Mai Tai, and Russell has reaffirmed his own love for both Tiki drinks and Tiki culture. He sat down with us when we checked in to see how everything was going after one month in business.

How's the first month been for you?
It's been great. We have a really good weekend crowd. The one thing people keep asking us, is how has the construction affected business, and the answer is, we have no idea – the construction was here when we opened. It's just a constant for us.

You were looking to have a patio completed shortly after you opened. How's that coming along?
What we really wanted was to find the right contractor for it, someone whose vision for that space matched our concept for it, instead of building some generic outdoor space. We think we're about a few weeks away from that, so very soon, we should be having an outdoor Tiki space.

What's been the most popular drink so far?
The Mai Tai, by far. That's the drink everyone recognizes. You go to a restaurant in California and it's on every menu, same in Hawaii. So, people gravitate to it.

You've discussed this before, but why Tiki? What is it about this culture and this time and place in cocktails that draws you in?
Rum, actually. That's the number-one reason I like Tiki. It's such a versatile, easily drinkable spirit. And it brought me to Tiki. I like fruit juice. I like exotic flavors. Elizabeth is always telling me to drink more water, and I'm more into wanting passion fruit. Also, when I was growing up and we went out to eat, it was a big deal. And we went to places that seemed exotic to me: Mexican restaurants [and] Benihana, these places that looked like somewhere else than Houston inside. So that sense of escapism is something I came to love. And what else has that sense of escape more than a Tiki bar? You walk in and you see and feel things that are both real and utterly imagined. I'm blown away by the efforts of some of the people who do these kinds of places.

That's such a good point. You can't just throw up some thatch and call it Tiki. And you placed a big emphasis on being authentic here.
You have to know what you're looking for, so you have to know a little bit about this culture. You're right…you don't just buy a bunch of beach-theme stuff and stick it on a wall and call it Tiki. I've been collecting Tiki for a long time. I started with Trader Vic's cocktail books and some mugs. And I'd buy all I could find. I even had a room in our house that I turned into my room. You know, when Hurricane Ike hit, I was out of work for 12 days, and I went around the neighborhood and picked up all this bamboo and I trimmed out the bar in my Tiki room, and I made picture frames. So, I've been building toward this for a long time.

Yet when you opened, instead of doing the classic Trader Vic's or Don the Beachcomber recipes, you wanted to put your own spin on them. You've already said how much you love Tiki tradition, so what made you go in that non-traditional direction?
You know, the ingredients have changed since these drinks were made in the 1940s. We have access to much better stuff, and much more consistent things. When you think about how one little thing – like mango, right? Well, when you use mango, if it's not as ripe as it could be, it's going to affect the flavor. And then, maybe you're adding sugar to it. Or, it's over-ripe, now you cut it with a little lime. Growers over the years have become more consistent, and juices are better now than just stuff from concentrate. Our palates have changed, too, so the style of an old Tiki drink might not work as well right now. Also, I wanted to give everyone here the chance to create. Tiki can encompass all kinds of things, it's a broad canvas. We didn't want to regurgitate the Beach Bum Berry's drinks or Missionary's Downfall – I love the Missionary's Downfall, but I'm kinda tired of it. But I didn't want to be so confining that we said here, "This is the only way to do this." We've brought in some new ingredients to Houston, Amara, for example, which has a cardamom flavor to it. It works great in Tiki drinks.

Which Tiki bars inspire you, do you feel are really doing great things?
Tiki Ti in Hollywood. I mean, it's 800 square feet, maybe 12 seats and the place is packed. It's so small and so intimate, we just loved the idea that we might be able to do something like that. Smuggler's Cover in San Francisco is just an absolute escape when you walk in the door. There's a pirate ship there, and the décor…they just have a passion for the Tiki era that can't be matched. I wanted to do something like that, have a place where people felt transported to somewhere else. 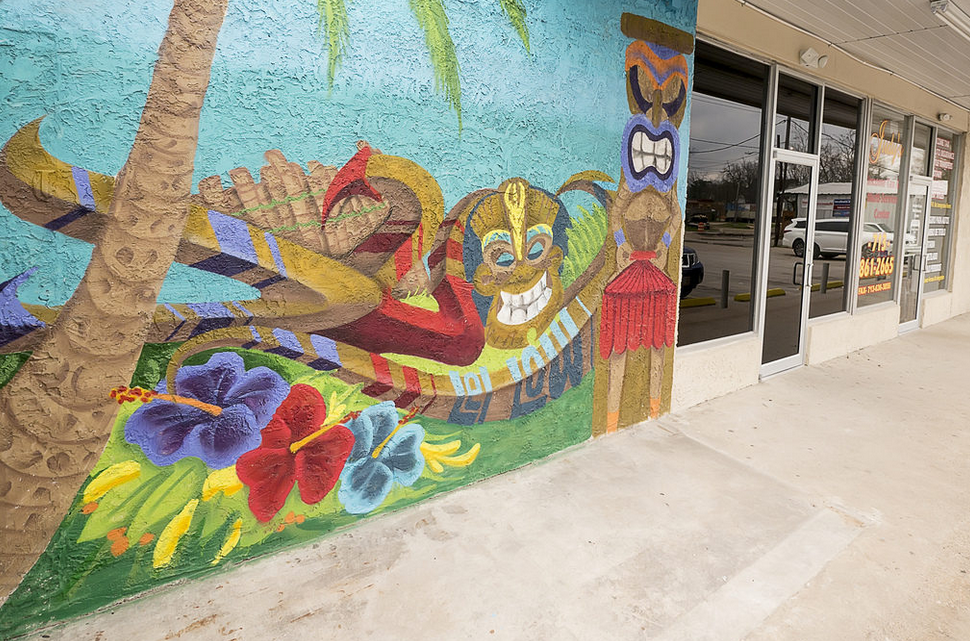 What's one of your favorite pieces of décor here?
The Witco carving. We found that in an antique shop. And the lamp above the bar is Witco, too. We saw that in a Mission Beach, California head shop – in the back they had all these aloha shirts and Tiki stuff. And we loved it, but it was more than we wanted to pay, so we came home without it and we dwelled on it. And we finally sent Liz's mom back to the shop with a whole big wad of cash. [Elizabeth's mother lives in California.]

What do you say when people tell you you're helping Tiki come back?
I say it never left. Over the years, you've always had people re-inventing and building Tiki bars. It had a heyday, but look at places like Tiki Ti and the new place in Disneyland [Trader Sam's]. Tiki cocktail culture began in California and spread across the country. To me, it's a part of American life. It's been around for 60-some-odd years. People's grandparents and parents have memories of Tiki, of these crazy places they'd go, restaurants and bars, that were like this and it resonates in the memory.