Share All sharing options for: Feast Your Eyes on Punk's Simple Southern Food

Editor markup for Punk's Simple Southern Food. This is only visible in the story editor.

Punk's Simple Southern Food is now open and it's already brimming with Southern hospitality and fine country cooking. The latest restaurant from Clark Cooper Concepts—an ownership group helmed by restaurateurs Grant Cooper, Charles Clark and revered chef Brandi Key—is serving smart Southern staples in the middle of the Rice Village, and there's a level of refinement in everything from the dishes to the decor. For chef Key, a native Texan, this place is a salute to her upbringing. "I am excited about the food at Punk's because it reminds me of growing up in the South," Key said in a statement. "I grew up standing on a step stool in the kitchen next to my grandparents. I remember vividly watching Grandma Pat frying chicken in an old cast iron pan and Grandpa Doc making buttermilk biscuits from scratch. We spent long afternoons in the garden and on the back porch shucking, cleaning and cutting corn off the cob. We snapped peas, cut okra, juiced tomatoes and canned anything edible. We gathered around dinner tables, back porches and picnic tables with friends and family." That might be why the dishes are deeply set in Southern roots, like Grandma Pat's crispy Buttermilk Fried Chicken, Gulf shrimp with pimento cheese, oysters, deviled eggs and a whole spread of biscuit options. And like its sister establishment Coppa Osteria, there's a take-away window here, except that instead of pizza, the window offers fried chicken to go. Although those who head to the fun space with its playful atmosphere will likely want to stick around and dine there or out on the enclosed patio. 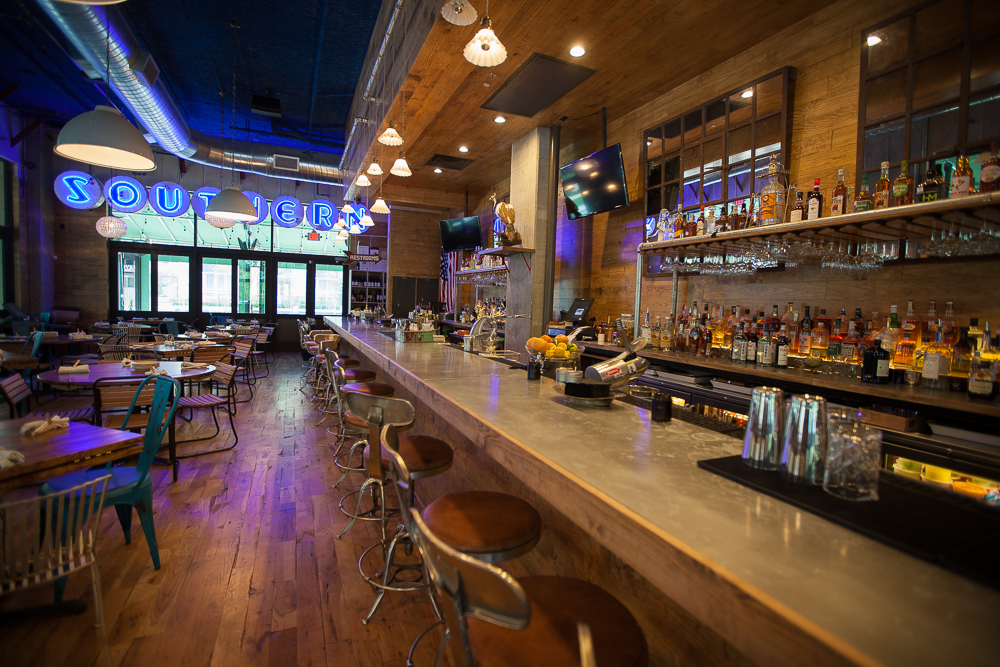 Unlike the ownership group's earlier establishments, including Ibiza and Coppa Ristorante, there's somewhat of a commercial touch to the place that makes it seem primed for expansion, from the labels on the condiments to the prominently featured branding. Although when the company launches its next project—and that is definitely something they're always working on—it won't be a replica of their prior establishments, since they have different concepts in mind for the future.
· Punk's Simple Southern Food [Official Site]
· All Other Eater Inside Reports [-EHOU-]
· All Other Opening Reports [-EHOU-]