An Update on Upcoming Tex-Mex Restaurants

Share All sharing options for: An Update on Upcoming Tex-Mex Restaurants

Delicious Concepts owner Ken Bridge isn't pausing to enjoy the success of his many Pink's Pizza locations, his diner Lola, his beer bar and restaurant Shepherd Park Draught House or his burger and beer spot Witchcraft Tavern & Provisions. Instead, the local restaurateur with an eye for the Heights is planning his next establishment: The El Cantina Superior. The upcoming Tex-Mex joint will stand in the space that once housed 1940s gas station Conoco, at the corner of Studewood and White Oak, facing Little Woodrow's on one side and Fitzgerald's on the other. When a fan of Bridge's projects asked where the name came from, granted that "el" already means "the" in Spanish, the explanation is that the "big boss has a really cool, classic El Camino, which he started calling 'The El' for short. And here we are." No word yet on when it will be open, but the construction has been ongoing for almost a year, with just the sign up for the last several months. We'll update when we get word on a projected opening date. 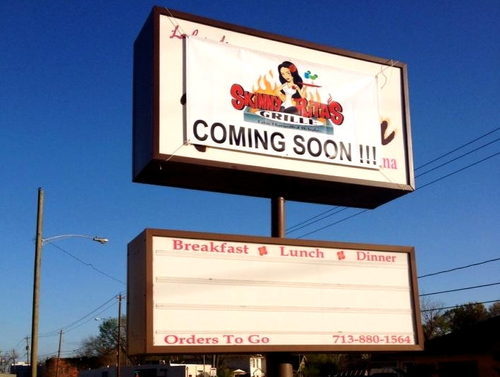 Finally, new El Tiempo locations are in the works. As Eater previously reported, a new El Tiempo is slated to open in Webster sometime this month. This location, like the Navigation outpost, will seat upwards of 300 to 325 people in a 15,000-square-foot space. According to a Facebook announcement, there are also plans to open another location in west Houston at 2605 Gessner either late this spring or sometime in the summer.
· All Other Spring Tracking [-EHOU-]
· Tracking This Year's Most Anticipated Baked Goods Spots [-EHOU-]
· All Other Coming Attractions [-EHOU-]