After a number of delays, former Austin chef Jason Liao hosted his first soft opening for Preview Modern Seafood Cuisine this past weekend. Despite Liao's background in sushi, the Sugar Land seafood restaurant will serve a variety of fresh seafood prepared in various ways. Liao told Eater: "I'm purposely not making it Japanese. I see all these sushi bars opening up all over — in Houston, Austin and Dallas — and no matter how far they try to take it, people always think California rolls. No matter how high-end the [place], all of the menus are the same." What will be on the menu includes "New Zealand Ora King Salmon, West Coast Uni, Big Eye Tuna from Tahiti." A private preview hosted last year included chicken-fried tuna with coconut creme, toasted almond, apple, black truffle salt, dill; scallops with sweet potato gnocchi, candied bacon, white truffle oil; and a hamachi ravioli with apple, ginger, roasted tomato vinaigrette. Thankfully, there will be a variety of rotating a la carte menu items so that diners can sample a little of everything. While Liao says that they're still in the soft opening phase, they're making reservations open to the public beginning tomorrow, May 13. "It's soft opening week up until the weekend when we have our TABC stuff finalized and have a drink menu ready, so we're still open to the public during normal business hours this week and there will be discounts for diners who come in," he tells Eater.

"It's BYOB until the weekend. We just want to run service and calibrate basically." Liao's primary concern is making sure that service is running smoothly before announcing a grand opening. He tells Eater that everyone "on the staff comes from a different cooking background so we're just going to be smoothening coordination out." Call 832-939-8968 or head to OpenTable to reserve a seat and head in for discounts this week. 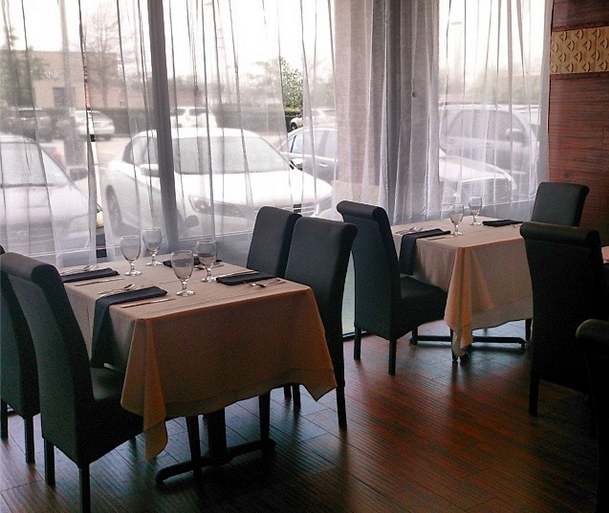