A Chat With Bryant & Welborn On One Year at Eleven XI

Share All sharing options for: A Chat With Bryant & Welborn On One Year at Eleven XI

It wasn't the first time Kevin Bryant or Joe Welborn, the chef and managing partner, respectively, of Montrose's Eleven XI had opened a restaurant. They knew about the long hours, building a team and working to make their vision a reality. But there was something different for them this time around. As the local hotspot celebrates its one-year anniversary, the pair sat down with us to talk about community support, why water lines are essential to running a restaurant and what's up next as they continue to grow.

You opened on May 7, 2013. What's the first year been like?
Bryant: It's been crazy. And wonderful. It's in some ways completely different from what we'd imagined, but it's been such a great experience.
Welborn: We'd always talked about how we wanted a neighborhood restaurant. And we have one. Probably 60 percent of the people in here every night are regulars, and they've become a lot like family. And we still have new people showing up, too. The support has just been wonderful.

So what's different from what you imagined?
Bryant: When you look at the area around us, there's Pass and Provisions, for example. We thought we'd be more casual. But it turned out that we became a little more upscale. We'd thought about being a casual concept that had all the amenities of a fine dining restaurant. We wanted perfect service and a high quality of food. We got that. But along the way, we weren't quite as casual as we'd intended.

The two of you have been around restaurants for a long time. How do you balance your skills set so you're complementing the other's talents?
Bryant: I joke that I do one thing well, so don't expect anything else. I cook. Joe does all that back-of-house stuff, not the kitchen back-of-house, but things like emails and looking at numbers and operating the dining room.
Welborn: You know, from day one, we just knew this relationship was going to work. I have experience in the kitchen and I can expedite if I have to, but that's Kevin's zone. And no chef wants to leave his happy zone. He works on the artistry and I do a lot of the day-to-day. I'm a sommelier, so I created the wine list, and look after the front-of-house folks. We really just make each other better. 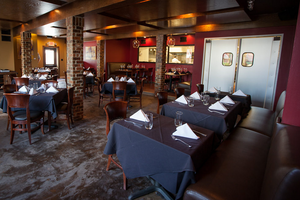 Because you've both been around the business for a while, you have people you've worked with before, some of whom came here. What's that dynamic like?
Welborn: Kevin is amazing at building talent, first of all. He recognizes it and he nurtures it. I've watched him take a guy who came in as a dishwasher and help move his career up and now he's the number three guy in the kitchen. And we really want to do more of that. When you have a team that tight, they don't want to let each other down.
Bryant: All of us on the team have always watched each other's backs. And we do want to develop talent and help people go on to do what they want to do. I've been working with Jose Ruiz, our sous chef and he's been great. And Joe's been grooming Trey Hollis, our assistant general manager, and we hope, as we go forward to develop other concepts…
Welbnorn: Kind of the way Bobby Huegel has developed his team at Anvil and built out that business, going into partnership at The Clumsy Butcher, expanding to The Pastry War and being a mentor for the next generation of bartenders and business owners. Or the way Hugo [Ortega] and Tracy [Vaught] have done, expanding out of Backstreet into their other brands.
Bryant: So that when we decide on when and how to expand, we have a team in place that go with it. That's exciting to see.

What's been one of the most surprising things about your first year in business?
Bryant: Aside from being less casual than we thought…the diversity of the neighborhood.
Welborne: That's been fantastic!
Bryant: We were really trying to be a place where everyone could be comfortable coming in here.
Bryant: It's worked really well. We'll have the bar crowd out on the patio, and inside there will be guys in business suits just come from OTC. I want all of them to feel relaxed here, that they can come in and feel like no matter who they are or what their background is, they're part of the family.
Welborn: I have never, ever seen anywhere else but this area where so many people of different ages, creeds, colors. And everyone's getting along. It's Montrose. You gotta love it!

What do you wish someone had told you about opening a restaurant before you opened this one? That might be tricky, since this isn't your first, but did anything put a crimp in your plans?
Bryant: The biggest hiccup was water pressure. We couldn't get enough from the city line and this is an old building. Man, I never thought we'd need so much. It was a struggle in the beginning, but we managed to straighten it out, running lines from the mainline to where we needed them.

What's next for you? You've updated the logo…
Bryant: We're starting to do some more brand management, year. We would show people our logo and ask, "What's the name of this restaurant?" and they'd eventually get it, but few of them said "Eleven Eleven" the first time. Now, we have the roman numberal, XI, in a circle and Eleven Eleven underneath spelled out, and it looks clean.
Welborn: We definitely plan on staying in the market. This is a beast; it's a really large operation. So, we're looking at some opportunities for some smaller concepts. But we're never going to endanger the firstborn child for the dream of expansion, so we're looking, but we'll do it slowly.
--Holly Beretto