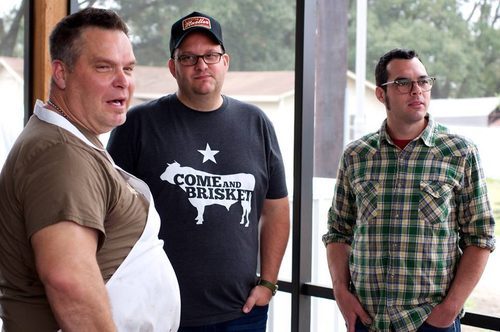 Lone Star is sponsoring a barbecue tour hosted by Daniel Vaughn, Texas Monthly's barbecue editor. He'll be visiting the Houston area to talk smoked meat at four stops, including Gatlin's BBQ & Catering, Virgie's Bar-B-Que and Eater Houston Essential 38 spot Corkscrew BBQ before concluding at meat mecca Killen's Barbecue. This time around, Vaughn will be explaining how the Texas Monthly team chooses its top fifty 'cue joints, as well as "what he looks for in a slice of brisket, and other secrets of the trade. As the country's only full-time barbecue editor, Vaughn has more than a few stories to tell." Tickets for the May 31 tour are now on sale: TM BBQ Road Trip.

CITYCENTRE— Ten competing food trucks and restaurants will come together for the Curry Crawl on Sunday, May 18 from 5 to 8 p.m. Hosted by Chef John Sikhattana of STRAITS (800 Sorella Court). Guests will enjoy unlimited tastings of dishes infused with curry, wines, craft beer, a Bloody Mary bar and craft cocktails. Among the competitors are John Hill and Matt Opaleski of H-Town StrEATS food truck, Anthony Calleo of Pi Pizza Truck and Sandy Witch Sandwich Company, Pak Tsui of Fat Bao and Edward Hoyos of Chi'Lantro BBQ. Tickets are $55 and can be purchased here. [Eaterwire]

POP-UP WIRE— The Flat will be home to a series of pop-up dinners from pitmaster John Avila, according to the Chron: "The first pop-up dinner — John Avila's Backyard BBQ — will be 5-10 p.m May 26. That's Memorial Day. Avila said he plans to offer a tapas-style menu ($6-$12) that includes smoked brisket, pork shoulder, ribs and turkey breast, as well as some unexpected dishes."