Share All sharing options for: El Celler de Can Roca to Launch Pop-Up Series in August

This August, the brothers Roca from El Celler de Can Roca in Girona, Spain—ranked the No. 2 best restaurant in the world on the World's 50 Best Restaurants list— will officially launch the Roca & Roll World Tour 2014. Leaving behind their enviable kitchen—it is larger than the dining room—the brothers and their staff will pack up and embark on a global adventure setting up pop-up dinners in different cities, while El Celler remains shuttered for five weeks back home. The back-to-back stops will include the official launch in Houston (three days), Dallas (two days), and then visits to Colombia, Mexico, and Peru—all locations where the tour sponsor, BBVA Compass, has a strong client base. Seating for 50 will be offered twice a day, but unfortunately for the general public, they are reserved primarily for BBVA guests and clients. In addition to supporting the tour, BBVA Compass is also establishing scholarships for four Texas student-chefs: Two from the Art Institute of Houston and two from Le Cordon Bleu in Dallas. Included in the scholarship is a four-month program to study under the brothers at El Celler de Can Roca, roundtrip airfare to Girona, housing, and training at Spain's Autonoma University of Barcelona.

Three is a magic number and there is no better personification of its powers than the brothers Roca of El Celler de Can Roca in Girona, Spain. Having established the foundations of their three-star Michelin star restaurant in 1986, chef Joan Roca, sommelier Josep Roca and pastry chef Jordi Roca will astound guests with their innovative, impeccably crafted dishes that present diners with a fully immersive and complete sensory experience. 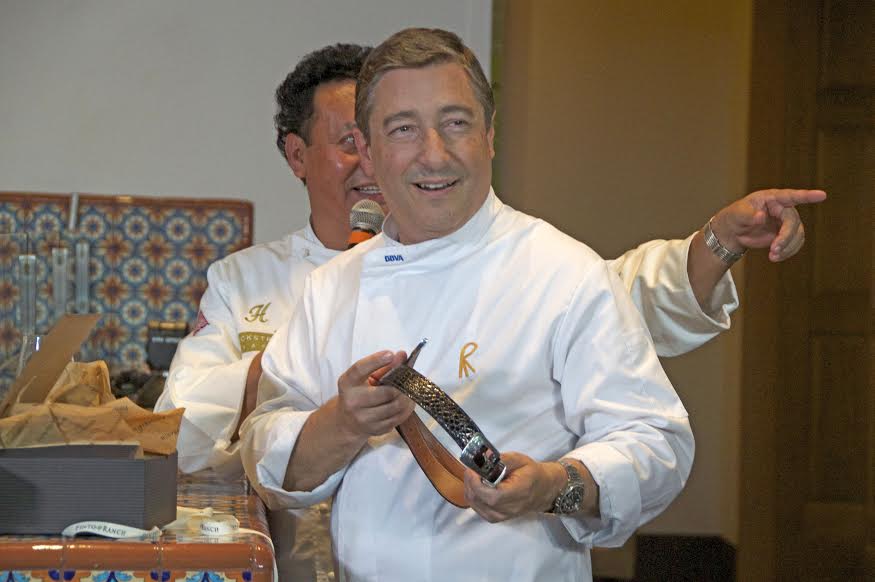 During a reception at Caracol hosted by chef/owner Hugo Ortega, Chairman and CEO of BBVA Compass Manolo Sánchez and Houston City President of BBVA Compass Mark Montgomery, welcomed guests to a fanciful feast of mesmerizing complexities created by Roca and his staff. Through a brief address to his guests, Joan expressed his excitement for the upcoming tour as well as gratitude toward BBVA Compass and local chefs who have embraced and supported this project. As translated by celebrity chef and translator-for-the-day Ingrid Hoffmann: "For them this was a way of finding a happy middle. The type of restaurant that they run they could not envision doing it any place else in the same way unless they literally closed and came. Their philosophy is to not conform, to not do things halfway, to really push the envelope.

"He feels very comfortable with all the chefs and the great support on land, this wonderful restaurant, and all of whom he's spoken to. He is very grateful and feels confident that he has what needs to provide incredible experiences."