Share All sharing options for: Pigged Out: The Go Pig or Go Home 2014 Winners

If you were looking for a cut-throat culinary challenge, Go Pig or Go Home wasn't it. The annual throw-down, held in the parking lot at Kata Robata was more of a street party, with the beer free-flowing, the music an '80s-'90s groove, the sheer number of things you can do with a sucking pig on unabashed display.

All the heavy hitters were there. (Well, all the heavy hitters who hadn't been nominated for this year's James Beard awards and were in New York.) There was Randy Evans, of Haven, kicking up a green-hued queso, laughing about how if you're going to make queso, "You can't do it without that old-school processed cheese." There was Ryan Pera of Coltivare/Revival Market, combining sausage and pickled oysters in to a funky variation on Bo Ssam, a process that took him five days and dozens of little steps to create. This is the same Ryan Pera who took home first place in this challenge in 2012, and only just managed to go on the trip to Japan he won for his efforts. "Kyoto blew me away on a culinary level," he confessed. Over at Killen's booth, Ronnie Killen, who was last year's Grand Champion, looked up from cutting ribs and smiled, his barbecue comfort food a buffet of savory sausage, well-seasoned ribs and a sweet-smoky maple bread pudding. Randy Rucker of the upcoming Bramble offered a smoked pig and black-eyed pea gumbo. Mike Potowski took on the cronut craze, offering up a "Ponut," a totally caloric concoction of deboned suckling pig and melted Havarti in a miso-glazed donut, your top with pickles and mustard. "It's lots of pig here!" He raved. "And lots of good company."

And that was the echo throughout the day, from the chefs, from the crowd, from various press colleagues. The competition aspect of it, while important for bragging rights and being crowned Houston's Pig Throwdown King, seemed so much less important than everyone just kicking pack and pigging out. In its third year, Go Pig or Go Home brought together 16 of the city's chefs in competition for who could make the best thing happen with a suckling pig. Judges gave out a prize for the Grand Champion and there was also an award for the crowd favorite. 8th Wonder provided beers for the sampling, along with Dutch Small and his team from ByeJoe's Tent of Inebriation. Even better: A portion of the day's proceeds went to Last Organic Outpost, a charitable organization that generates healthy communities and establishes a local food economy in Houston's under-
served neighborhoods. As if that weren't enough, on Kata Robarta's back patio, Terry Williams, Anvil's GM and Jonathan, one of the craft cocktail purveyor's bartenders, were whipping up Sloe Comfortable Screws, a blending of homemade Southern Comfort, dry and sloe gins, orange juice and lemon, with the $5 price tag benefitting local baker Jody Stevens, whose house burned to the ground Wednesday night. 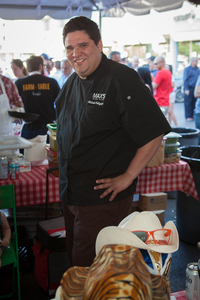 Michael Pelligreno of Max's Wine Dive won the Grand Champion award for his array of piggy pickings: a pork butt tamale, a pozole created from the head and feet, pork belly pupusa and tacos topped with crispy veggies. Asked about why he loves the event, he offered, "Come on, you get a bunch of chefs, you put them in a cage – with pigs! And you turn them loose to create whatever. What's not to love?" In a repeat from last year, Soma's Gabriel Medina again walked away with the People's Choice award for his Korean Pork Bo Ssam.