A Chat With Chef Ross Warhol of Pelican Club

Share All sharing options for: A Chat With Chef Ross Warhol of Pelican Club

May 1 marked the first official day that Pelican Club, formerly a private supper club from the estimable Gaido's family, welcomed the general public. The 58-year-old establishment is making great strides to appeal to a new generation of diners by re-writing the menu, debuting a renovated space and hiring young, well-trained talent in the form of new executive chef Ross Warhol. After graduating from the Culinary Institute of America in 2008, he became the presidential private chef at the Athenaeum hotel in Chautauqua, N.Y. and enjoyed internships at French Laundry, elBulli and Alinea. He won the Excellence in Baking and Pastry award from CIA in Napa Valley, accepted an invitation to cook at the James Beard House in Manhattan and eventually moved to Galveston to lead the kitchen at the Pelican Club. Now, he's serving up seasonal Gulf cuisine with his own spin.

How did you come to this position at the Pelican Club after finishing your contract in New York?
Casey Gaido, who's the man that runs this whole operation, he was in my culinary class. We met there, he came back home, took over the family business within the past few years, and he gave me the call last April. He said, "Hey I have this opportunity, we want to re-launch the Pelican Club, come down and check it out." So I came down last April for a few days, thought about it for a couple weeks, and decided to take on the project. So I moved down in October because I had to finish my contract up in New York. And here we are, six months later. 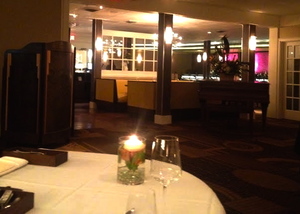 So you wrote this revamped menu, is there any reason you chose these dishes for this audience? That you took this direction?
Right now, this is my comfort food. I like to label ourselves as "progressive American" with a focus on global ingredients. We source from four different farms, three which are a 25-minute drive away. We stop there during the weekend mornings. Our meat rancher is Black Hill Ranch, just above Houston. Our menu was written to be approachable because I knew they were stepping away from memberships. I really like to challenge the palate with textures, flavors, one of my favorite pairings is white chocolate and peat. But I think it's a little too adventurous right now. We're just trying to break the ice, but I say simple food is good food. I just want to keep the focus on the ingredients, like the pork belly and the ribeye. And what really got me into the whole local thing, working with the farmers, I worked at a restaurant in Sweden where we did everything in-house. Winter vegetables, we would harvest a large crop in the fall and would dig them in the sand and soil in our basement, then we would have root vegetables all the way until the spring.

How have the different kitchens you've worked at been, like French Laundry? What did you do there?
Just stage. Just a pair of hands in the kitchen, just peeling walnuts. That was my first Michelin restaurant, and that's where I learned discipline. One of my good friends is a sous chef there now, I met him when I was working at elbulli, I was working in the cold kitchen where I ran a station and helped out in the kitchen. From there I went to Alinea, and that was my least favorite experience.

Alinea was your least favorite? Why?
Yes. The kitchen is so cut-throat. A stage that started two days after I did was yelling at me. I was like, we're all here with one common goal to make awesome food. So the kitchen atmosphere wasn't what I enjoyed. Here, we keep it serious about the food, but we're not afraid to laugh or tell a joke. When it comes to the food we keep it serious, but we do like to smile and laugh throughout the day.

When you leave Galveston and visit Houston, where are the places you've eaten at or that you want to eat at?
I've been to Underbelly and Uchi – twice, three meals. That's it, sad to say. I don't get out much because with this project, it's been a lot.

So what do you have planned for the future of the menu at Pelican? You said you want to get more adventurous?
Yeah, the main table out there will be the chef's table. We're hoping to book it for six individuals a night. There will be a nine to 12-course menu of whatever we feel like cooking. So most of it will be at a whim. It will be planned out for us, but the use of liquid nitrogen and food-based chemicals, really featuring the art behind the culinary arts. Because my mother is an artist, and I've always wanted to be an artist growing up.

The roasted beet dish looked like an artist's palette.
Yeah, I couldn't draw, and two years ago I realized, when I was really studying food seriously, we can be artists.

So having worked at all these world-class restaurants, what's your personal favorite dish that you've created when working on your own time?
That's tough. There's a sauce that I make that I'm proud of. It's onion caramel. We make caramel using onions, juice and sugar, then add red wine, red wine vinegar, balsamic vinegar, we reduce that down into a maple syrup them cream it out. It's a savory caramel sauce.

As a young chef at the head of a kitchen, what advice would you offer to other young chefs who want to follow in your footsteps?
Just keep your head down and keep working. Even if you're in the corner washing dishes, just keep your eyes up and see what's going on. No matter what situation you're in, in a kitchen, just always take note. For a dishwasher, see how he washes a dish, his organization. Dishwashers are some of the most organized people in the kitchen, I think.

But also, I never expected this career to take me around the world and allow me to have the opportunities I have. I've been so grateful for it. And it all just comes with hard work, and the passion has to burn within, that's what really drives me.

For now, Pelican Club is seating diners from Wednesday through Saturday from 5 to 9 p.m. by reservation only (call 409-761-5503 to get a seat). The bar is open and offers a small bites menu that's separate from the dinner menu. Happy hours are from 4 to 5 p.m.
· All Other Eater Interviews [-EHOU-]
· Pelican Club [Official Site]
· Eater Houston Heatmap May 2014 [-EHOU-]