Share All sharing options for: Big Eyed Fish Slated to Open On Washington Ave. In July

Rooted in family, hospitality, and a love of good food, Megan Adams is making her mark on Houston's vibrant food scene with the opening of her first establishment, Big Eyed Fish, which is expected to debut in mid-July. Just a block south of Liberty Station on Washington Avenue, the 1916-era building—formerly Alice's Café & Lounge—is getting a facelift, an updated interior, and a creatively traditional menu paired with top-notch libations.

You might be wondering what a restaurant called Big Eyed Fish has to do with modern-Southern cuisine, and the truth is it just kind of happened that way. While spending time with family a couple years ago, the Dave Matthews Band song "Big Eyed Fish" began playing in the background and Adams' step-mom Bonnie Purvis suggested using the title for a future restaurant name—adding hopes of luring the famous group to one day play at the eatery. Adams says, "We came up with the name before this concept, location, and everything. The whole concept is "fish out of water" and being comfortable out of your element, which is what we're all about here. Lo and behold a couple of years later we found this location and said we gotta use it. It had nothing to do with us being a seafood restaurant or anything. It was just a family secret." When Adams and her team met to discuss menu ideas they discovered a natural gravitation toward classic Southern fare, which gave executive chef Sandy Underwood the perfect dock from which to jump into modern spins on well-loved dishes.

Adams elaborates, "We came up with a mock menu when we were picking out chefs, and it just ended up being Southern. At the end we noticed a lot of it was fried, and buttered, and greased and very Paula Dean-ish. Then when we brought Sandy on she completely tweaked it and made it her own and made it a million times better. It's what we eat, it's what we like." 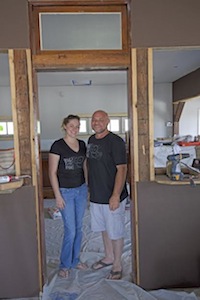 Take, for instance, the chicken-fried snapper, potato salad tater tots, and Texas quail served with a pomegranate bourbon glaze. Chef Underwood's made-from-scratch menu demonstrates her pride for excellence: Every sauce, sausage, and dressing will be made in-kitchen using her own recipes. Adams hopes to construct an herb garden on the property to further encourage Underwood's fondness for local flavor and canning jars filled with Underwood's pickled vegetables will grace the dining room, adding country flair along with an opportunity for guests to purchase take-away delights. Early-risers will be pleased to learn that a weekday breakfast menu and fresh coffee will be available starting at 6 a.m. and Sunday brunch will give folks a reason to sleep in after hitting other local favorites on Washington the night before. 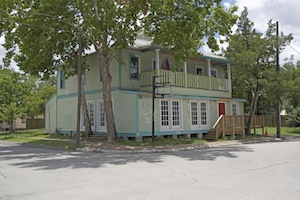 Working alongside dad Doyle Adams—you might know him from The Corkscrew, among other local establishments—the younger Adams is trying to retain as much of the original structural elements as possible while embracing features that embody the warmth and character that give good Southern buildings their timeless charm. The effect comes off as effortless, which just goes to show how perfectly suited Adams is to design and create her debut restaurant. When you visit Big Eyed Fish on opening day you'll notice a fresh exterior including blue-green paint, dark gray trim, and a wooden deck on the back featuring additional seating. Inside, the original layout remains true to history while modern touches create a versatile, welcoming space. To compensate for the lack of natural light in the original building, Doyle installed new doors along the downstairs walls, which splash the exposed beam pillars and hand-painted floor with sunbeams. Doors from a 150-year-old Galveston home find new life as the generous bar where beer devotees and wine enthusiasts will want to sidle up to again and again. Forty beers will get cozy in the coolers, 30 of which will be local Texas craft and include the likes of Karbach, Saint Arnold, Rahr & Sons, and Southern Star. Adams' former experience working at The Corkscrew ensures the wine list will please the palate with 75 bottles from which to choose: 45 red, 30 white. Wine will get additional notice in the dining room via handmade tables topped with wood from wine boxes.

Bonus seating will include antique butcher-block tables and a dining room table from another home—both items discovered by friend/landlord Bob Mize. 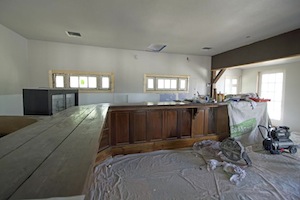 Big Eyed Fish is clearly Megan's project, but she also sought and accepted support from various members of her close-knit clan. With dad Doyle serving as general contractor, advisor, business partner and best supporter, she welcomed the talents of her brother Doyle Junior (DJ) and mom Sonya Stutzman. DJ created the restaurant logo and Stutzman designed and developed uniforms. As such, this new venture is a family collaboration, which is fitting since Megan wants her guests to feel like part of the family. "With this building we wanted to keeping everything homey," says Adams, "[With] great service and even better food."