One Year In at Pistolero's; Stone's Throw to Open Soon

Share All sharing options for: One Year In at Pistolero's; Stone's Throw to Open Soon

It's been a good year for funky Montrose Mexican spot Pistolero's. In addition to marking its first year in business, owner Shawn Bermudez—who also owns Royal Oak, Boondock's, The Golden Grill, Koagie Hots and retail shop Pavement—is getting ready to open a new venue, Stone's Throw, aptly named for its proximity to his other establishments. As if that weren't enough, diners are raving over a particularly bad-ass dish: His take on the hamburger-torta hybrid. Clearly, it's good to be in business. We asked Bermudez a few questions and got him to share his thoughts on hitting his stride at Pistolero's and when he's opening his next Lower Westheimer bar.

What's been your favorite thing about your first year of Pistolero's?
Eating Mexican food four to five days a week. I have always been a huge fan of tacos and am proud of the large tasty variety we offer. After a year of eating there as often as I do, I'm still not tired of it. 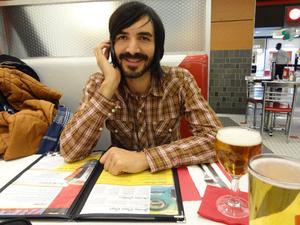 What's the most popular menu item(s) at Pistolero's?
The customers have responded well to all of the tacos, but our most popular tacos have been the barbacoa and the al pastor. Food critics and our customers have also really enjoyed our Bad Ass Hambur-Torta, which is a hand made beef burger with a fried egg, bacon, chili cumin fries, mushrooms, onions, pickles & jalapenos.

What's been your impression of the neighborhood (and theirs on you)? Lots of things have changed in that corner of Westheimer; tell us about them.
We have been fortunate to have been well received by the neighborhood and couldn't be happier with the support they have given us. Montrose is definitely experiencing a growth spurt in population and with that, it's only natural for new businesses to begin to open. I've lived in Montrose since I moved here over ten years ago, and I'm excited/curious to see where this growth takes us.

What's happening with Stone's Throw?
We are hoping to open up by the end of June, if all goes as planned. We unfortunately ran into a few more obstacles than we would have liked, but the delays have given us a chance to fine tune everything from the decor to the cocktail menu. This project, by far, has been the most challenging project I've ever done, but, with that being said, the hard work will definitely show and I know it will be a welcome addition to the Montrose neighborhood.