Share All sharing options for: Montrose Has a New Pizzeria Featuring Late-Night Hours

Montrose just welcomed the new location of a family-owned chain of pizzerias over the weekend. Ray Salti and his son Tarek Salti, proprietors of Sorrel Urban Bistro, have just launched their tenth Pepperoni's Pizza at the old Photobooth space on Montrose (next door to BB's Cafe). (See map at right.) Tarek says that he lives nearby, and when this space opened up, he and his father jumped at the chance to lease it. "The landlord decided to go with us because he wanted someone who wasn't a big corporate chain coming into the neighborhood," Tarek says. "He wanted to preserve the neighborhood vibe."

To that end, the Saltis have implemented some Montrose-friendly dining options, including five new menu items: Italiano Texano, Mas Mushroom, Spicy Veggie Masala, Antipasto, and Roasted Veggie pizzas. The breakfast pizza menu will debut next week, making the pick-up window a new morning destination for convenient egg-topped slices. That same drive-thru window can be used by patrons who have pre-ordered pies on the pizzeria's website. Another way the Saltis have tailored this location to the neighborhood is by implementing late-night hours. Since the new pizzeria is still in its soft opening phase, they're testing schedules, so for now they're open from 10 a.m. to 10 p.m. Monday through Wednesday; 10:00 a.m. to 11:30 p.m. or midnight Thursday through Sunday; 10 a.m. to 3 a.m. Fridays and Saturdays. They'll set their permanent hours depending on the public's response to these tentatively-set hours. 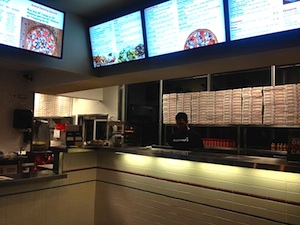 Although the Saltis have been in business for 20 years in the outskirts of the city, this is their first in-the-Loop Pepperoni's, and they're planning on testing out different recipes and mixing up their original concept to determine what the public in this area wants. In addition to pies, they've got a selection of subs, calzones, gyros, wings and salads. Here's hoping that we see the emergence of a new genre: More late-night options that are better than they have to be.
· Pepperoni's Pizza [Facebook]
· All Other Opening Reports [-EHOU-]