Take a Look Inside a New Heights-Area Bakery

Share All sharing options for: Take a Look Inside a New Heights-Area Bakery

Tucked into a nondescript building on Studewood is Red Dessert Dive & Coffee Shop, your soon-to-be favorite source for cake, caffeine, and craft brews in the heart of the Heights, which is preparing for a soft opening on June 24 now open (hours below). Here, owner Jessica Lusk and pastry chef Ashley Leonard, formerly of Hotel Zaza, will put their unique brand on traditional baking.

Named after Lusk's late "Mam-Maw" Stella—nicknamed Red by Lusk's grandfather—the café will feature an endless stream of treats inspired by the ones Red herself made. Along with a rotating list of seasonal and experimental items, a menu of enticing offerings includes a Valrhona chocolate chunk cookie sprinkled with fleur de sel, cardamom oatmeal cookies, butterscotch s'mores blondies, and the soon-to-be-popular "Debusker": An unexpected yet rather brilliant blend of brownie, cookie, and M&Ms. The Debusker is the brainchild of Lusk's seven-year-old cousin Cade, and was his contribution when asked what he wanted to see on the menu. Leonard will also present two three-layer cakes per day, alternating the flavors once a week. Vegan, gluten free, and Paleo options will also be on offer; Lusk will source these items from fellow Heights small business Clean Sweets, to ensure that they meet the strict standards so important to those who follow the associated diets. 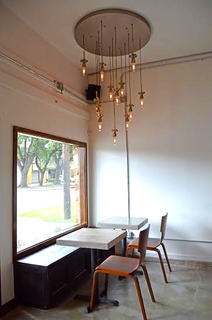 In addition to the sweet treats, a small menu of savory items will be a part of the spread, including homemade kolaches and specialty beer bread. Outsourced wraps and pre-packaged salads will round out the selections for those seeking a more substantial meal. The café will also feature local craft beer and a tightly edited wine menu. Lusk credits Matt Toomey of Boomtown Coffee as her go-to caffeine guru. Toomey is consulting on the coffee program and even gifted the shop an espresso machine. "I'm not changing a thing. Their coffee is delicious," Lusk says. "[We'll serve] cappuccinos, lattes, macchiatos, iced coffees and really good drip coffee."

As for the design of the space, this is a sans-pink, no-frills establishment. Diners won't see a case crammed with jumbo cupcakes lost beneath mountains of frosting. Instead, guests will fall under the spell of clean neutrals, warm woods, and modern-yet-homey touches that offer an atmosphere to please all kinds of dessert lovers. Lusk—who has a master's degree in architecture and restaurant project management—says, "Part of my design and research was not understanding why desserts had to equal girlie. I don't understand the correlation of 'desserts equal girlie or kiddie.' Men like desserts, too." Lusk's love for Hill Country town Fredericksburg blends effortlessly with the talents of local welder Bob Martin of Merge Studios (he made the barstools and bar frame by the front window). A cedar plank, cardboard deer head and metal letters also hail from Fredericksburg, lending the space a warm, rustic charm. Another unique feature is the reclaimed wood along the base of the counter, which came from the floorboards of her grandfather's childhood best friend and neighbor's house on 18th street in the Heights.

With that aesthetic in mind, Lusk's music playlist for the space will be more Rolling Stones, Pearl Jam and Jimi Hendrix than cutesy cartoon tunes found at some shops, "Being here with the amazing dessert with an amazing cup of coffee or wine with the Stones playing. I cannot wait for that. And I can't wait to experience that myself." Neither can we.
Update: Hours are 7 a.m. to 7 p.m. Tuesday through Friday; 10 a.m. to 7 p.m. Saturday; 10 a.m. to 3 p.m. Sunday; closed Mondays.
-Ellie Sharp
· Red Dessert Dive & Coffee Shop [Facebook]
· All Other Opening Reports [-EHOU-]