Korean spot Dosi is now certified open on Shepherd, in the space that once housed Toyama. And it's a long way from Spring Branch's row of Korean restaurants, in both distance and cuisine. The "Korean-inspired" dishes here are prepared by chefs who aren't seeking to provide authentic Korean fare, but rather, to put their own spin on classic dishes. Executive chef Jordan Asher—who's enjoyed stints at Pappas Seafood House, the Briar Club, Ibiza and, most recently, Mark's— is leading the kitchen with former Just Dinner chef Daniel Toro at his side. Asher tells Eater that their cuisine won't be typical Asian fusion, since what he hopes to present is "a little more inspired" than that. He says that instead of just melding Asian cuisines, he and Toro are tapping into their Southern roots to provide a unique take on Korean flavor profiles, since both chefs had to research Korean cuisine before taking the reins at this kitchen.

The Southern influence can be seen in certain dishes on the menu, like the bossam, where whole-roasted pork shank has a decidedly Texas twist, or the kimchi stew made with clams, pork sausage, squash blossoms and purple hull peas. "We want to provide an experience that's comfortable with inspired, creative food that's flavor first, presentation second," Asher says. That said, his dishes are meant to be as fun to look at and eat as they are to make: "I like to be more whimsical. We're all about creating the best food with Korean inspiration and not taking ourselves too seriously."

The menu features banchan—Korean snack-sized side dishes that typically accompany a larger entrée—at the top, followed by larger, shareable plates. Asher says that the family-style format is meant to encourage the kind of highly social dining experience that plays an important role in Korean culture. "We want to do serious food without it being pretentious," he tells Eater, noting that they want patrons to feel like they can "be loud" and have fun instead of taking upscale food too seriously. In keeping with typical Korean cooking, Toro and Asher have started a fermentation program. They are working on in-house fermentation that includes tomatoes, blackberries, beets and even honey. Asher notes that fermenting different ingredients lends a distinct flavor to each dish, one that's not readily detectable by diners but that creates a memorable tang that won't merely placate the palate. 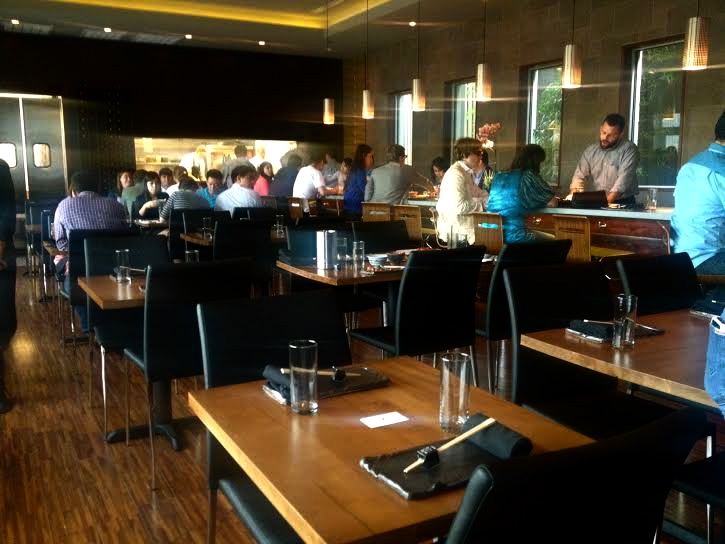 Apart from the list of colorful dishes is a bar program that highlights soju, the Korean spirit of choice, in a variety of flavors. Diners are greeted with a wall of jars containing fresh fruit soju infusions. (If El Big Bad's case of infused tequila is a draw for you, then imagine this boozy partition as its Korean cousin.) Yogurt, watermelon, strawberry kiwi and lychee-flavored soju makes for some aromatic concoctions. Rounding out the soju infusions are local beer, a variety of mojitos, sake and an extensive wine selection.

The wide-ranging bar program at Dosi will suit the establishment's late-night hours. For now, Dosi is open daily from 5:30 p.m. to midnight, with hours potentially extending to 1 a.m. on weekends once place has found its audience.
· Dosi [Official Site]
· All Other Opening Reports [-EHOU-]