Yes, agreed everyone. It was hot. Hugs were given, with apologies for being dripping wet. Beer and margaritas and Pellegrino were guzzled. Faces were painted. Balloon animals were made, too, for the record. It was all part of the inaugural Culinary Carnival, the latest chef throwdown for charity, this one the brainchild of Kevin Bryant and Joe Welborn of Eleven XI. The Sunday fun day brought out nearly 400 people to the Montrose restaurant's parking lot, with chefs from restaurants all over the city cooking up their best interpretations of carnival food, the only stipulation Bryant put forth was that it had to be on a stick. Proceeds from the event went to PULSE at St. Luke's Foundation, the hospital's young professionals group, dedicated to fundraising projects.

Susie Jiminez of newly opened Trenza took home the People's Choice Award for her Ceviche on a Stick, a combination of red snapper, calamari, tuna and halibut with spring vegetables and an avocado mousse, marinated in orange, lemon and lime. "I love winning people's choice!" she said, laughing, as she and her team broke down their booth at the end of the day. "Judges awards are always great, but it's so much fun when a hundred people like you." The Judges Award went to Gabriel Medina of Soma Sushi, who dished up a deep-fried pork sausage corn dog, braised with beer and miso. "I just love the camaraderie of doing things like this," he said. "Hanging out, talking smack with other chefs. It's great."

"I'm already a big goofball," said Bryant. "So what's better than doing a carnival, bringing everyone back to childhood and happy memories? I reached out to my friends to come out and be part of it. And they have been so, so, so very supportive." Eleven XI's own Anna Large took home the award for best cocktail. Drew Rogers of Drew's Pastry Place doled out a mini cannoli on a stick; he wouldn't let us in on the secret ingredient in the filling, but told us he took great care to make sure the ricotta cheese, powdered sugar, cinnamon and nutmeg was "not grainy, like in a lot of cannoli. Ours is very smooth." 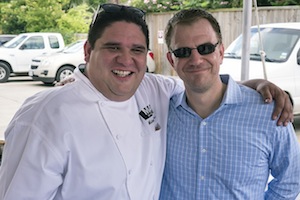 Max's Wine Dive's Michael Pellegrino came up with his entry – a foie gras stuffed elk meatloaf – just a few days ago. "We do a Meatloaf of the Day at Max's. The other day we did a foie gras stuffed ostrich meatloaf and it was out of control, the feedback we got. So, we did this port soaked cherries and a marsala cream, just in case there wasn't already enough flavor Ryan Hildebrand of Triniti had Gazpops, a frozen gazpacho popsicle, three layers of avocado mousse, lobster consommé and tomatillo and green tomato gapacho. "These are all components of things we use in the restaurant," he said. "And it's a chance to show people that Triniti is a pretty laid-back place."

"I am so pleased with the turnout, both the chefs and all the people who came," said Bryant. "We have such a great community of chefs in Houston," said David Cordua, who brought two ceviches on a stick – salmon with pineapple, and ahi tuna with a coconut cream and crispy onion, each atop a rice croquette. "This is a great way for chefs to support each other, and the community, in a real way."
-Holly Beretto
· All Other Hangover Observations [-EHOU-]