60 Degrees Mastercrafted just marked seven months in business, and for esteemed sommelier Vanessa Treviño Boyd, formerly of Philippe, it's been exciting to build the wine list and introduce guests to new items. In honor of The Five Days of Meat, she talked with us about some unique and classic pairings for meat and game.

First thing's first: Why should people care about food and wine pairing? What is it that makes matching the food to the wine important?
Wine is made for food. In my opinion, food shines when you put the right wine with it. They're each their own thing, food and wine, but when you marry them together, it becomes this absolutely different thing, and that's where the magic starts to happen. It gets you thinking about combinations of flavors and layers and texture.

Yes, but you have a Champagne bias.
Yes, I do. That's true. But if you take a red-wine base sparkling wine, for example, it has enough finesse to stand up to something sturdy. Like a sparkling wine that is more Pinot Noir than Chardonnay. Or the Egly Ourier Cuvee, which is 100 percent Pinot Meunier, which has a lovely spice to it along with the red fruit. It acts as a palate cleanser. With a rich cowboy steak or bone-in ribeye, that would work beautifully. You could do a white wine with red meat if you wanted, but I would stay away from oaky wines. The Willian Fevre 100 percent unoaked Chardonnay has great acidity that will cut through the fatty goodness of a steak.

What's the reason you want that to happen, to balance the acidity?
There are two tenets of wine drinking: You can work with the wine or you can work against it. So, you pair food with a wine that can enhance the flavors of that wine, or you can find foods where the tastes will contrast each other, like when something sweet balances something spicy. There's no in-between.

Okay, let's talk about some pairings for meats. If I say "lamb," what do you think?
Sadrantino. From the Umbrian region of Italy. It's like Syrah that when it's older acts like a
mature Bordeaux. It ages very gracefully, and it gets gentler, but it still has that core of spice, maybe even a little leather, a bit gamey that works with the lamb.

Prime Rib?
Oh, Syrah. I love Syrah. You know, Syrah is the answer to a table of six where some of them want Cabernet Sauvignon and some of them want Pinot Noir. Pax Mahle has a new project simply called Pax, and it's from the Sonoma Coast, just a few miles from the ocean. It's got lovely acidity, and the weather and geography of the far west Sonoma Coast lifts all the fruit in this wine, it keeps it dancing on its feet, all brambly, spicy, chewy, all those things Syrah loves to be. And it's balanced in its alcohol content. I mean, you don't want to be drinking bottle after bottle of something that's 16 percent alcohol. You'll get knocked off your butts.

Pick something for us for a ribeye.
Robert Sinskey Macien Bordeaux Blend, using nearly all of the main grapes of France's Bordeaux region. It's big, boisterous; this is not for someone who wants a shy wine. It's on the bolder side, this is for someone who wants to chew on that big, big fruit, but it has terrific acidity to cut through the richness of the ribeye. I know I keep going on about acid, but it's important. If you have a flabby wine, it just sits on the palate and when you combine it with food it just feels – you're not doing anyone any good with that combination. 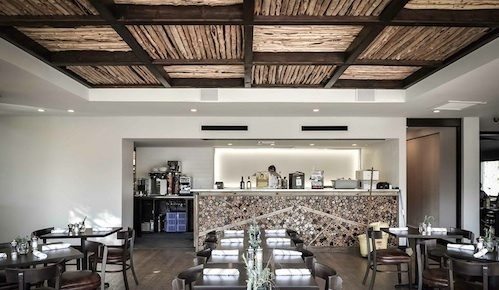 Every steakhouse has a bacon-wrapped filet mignon. What's your go-to for that?
I might go with a sparkling for that. The Roederer Estate Rose out of Mendocino, California is a really nice, affordable pick. It's got some Chardonnay in it but a lot of Pinot Noir and it's old enough to stand up to the cut of meat. It won't overpower, there's beautiful delicate fruit, and I think it would be a good complement to the bacon.

What about barbecue, maybe brisket?
Zinfandel is the obvious choice, but I think Teroldego, an Italian varietal out of Alto Adige. There's a lot of sweet, red, bright fruit, all the things you want with barbecue.

All right. I'm a fan of Gigondas. If I asked you what's the first meat that comes to mind when you hear that, what's your thought?
Lamb. Provencal-crusted, lots of rosemary and thyme. You think about what grows in Gigondas and it's fields and fields of lavender and rosemary. And I'd even go so far as to say you want the gamey shoulder of the lamb, something with a lot of character.

Anyone who's been in one of your restaurants know that you love to look for the unusual pairing. What's a unique food and wine combination we haven't talked about?
Dolcetto and pork. Because Dolcetto has a great tanic structure, and I'm thinking pork butt with a mustard-based wet rub. You get that wet, savory taste and savory spice, depending on the mustard and the Dolcetto plays off of it and cuts through the richness.

What's your ultimate goal for the wine list at 60 Degrees?
I like to offer the sort of wines that are off the beaten path a little bit, something people aren't expecting and won't see anywhere else, things they might not think to order on their own. Otherwise, what's the point of having a sommelier on the floor? Any server can open a bottle of Jordon. But I like to tell people that wine is travel. It transports them to another place. And I get to help them travel there, whether it's the Santa Cruz Mountains or somewhere else. I can tell them the story of the wine, the people who made it, what the land looks like, what the culture is there. People go into restaurants to relax and get away from the problems of their day. And I love that I get to distract people with wine.
-Holly Beretto
· All Other Eater Interviews [-EHOU-]
· All Other The Five Days of Meat Coverage [-EHOU-]