Share All sharing options for: Pax Americana Brings Peace To Montrose This Summer

At Pax Americana, "We want the food and the beverage and everything else here to start a conversation," says owner and restaurateur Shepard Ross (also of Glass Wall and Brooklyn Athletic Club). With these words, along with partners Dan and Mark Zimmerman, Ross is inviting guests to join him and his staff on a journey that extends beyond the plate, the table, and even the restaurant's walls. He wants to start a discussion about where food comes from, how it is made, who made it, and how it connects the producers, chefs, and the diners to one another. And while the words Pax Americana may bring to mind visions of a country coming together to celebrate post-war victory, at this new Montrose neighborhood eatery it's more about creating a sense of belonging and community.

An incredibly personal and well-curated food & beverage menu, plus iconic wall art (an original Warhol, for example) and a killer playlist of multi-generational American music, set Pax Americana on the path to becoming a neighborhood favorite. And with dual dog-friendly patios, a private dining room, and a serious collaboration with sister-bar and neighbor Zimm's, Pax has something to offer everyone – and soon. The restaurant is set to open this summer starting with dinner service six days a week, Tuesday through Sunday, followed eventually by brunch service on Saturdays and Sundays. The menu is well-appointed and affordable with dishes running from $8-$20 and additional featured specialty items ranging from $20-$40.

The culinary menu at Pax is a beautiful blend of comfort-food-meets-modern-flavor utilizing as many local ingredients as possible. Whereas Co-Chefs Adam Dorris and Plinio Sandalio will procure an extensive list of meats and produce from names like Black Hill Farms, Atkinson Farm, Tejas Heritage, and Blue Horizon Seafood, Ross clarifies that local won't necessarily denote the Houston-area, or even Texas. "I still see local as U.S. local," he says.

While some items will rotate on and off the menu, especially if they are guest favorites, Dorris stresses "We want to challenge ourselves to create new food all the time and also to challenge the diner to really experience something new and look forward to new things. We want there to be something exciting every time that you come in." So you'll see a smoked brisket on the menu, or grouper and red snapper from the Gulf, but they will be prepared in very different ways than might be expected. Cultured butter and house-made cheeses will also grace the tables along with house-cured meats - a nod to Dorris' former experience working with Morgan Weber of Revival Market. The team is collaborating with "The best bakery in the South. The greatest bakery of all time," according to Dorris and Ross, but they are waiting until the partnership is final to release the name.

The menu will flow, Dorris adds, and create a story from start to finish – as such the appetizers through desserts will be collected together on the same menu so that each element is a continuation of the one before. This means that the pastry/dessert menu crafted by Dorris' counterpart Sandalio will also reflect whatever is being utilized in the main kitchen. So, for example, the local peaches on your cheese plate appetizer may pop up again in the main course and then make another appearance in the dessert, or even at the bar in the form of a Peach Old Fashioned. 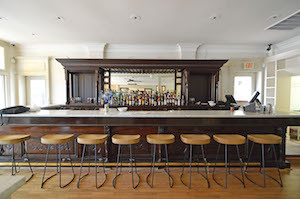 Which leads us to the beverage program headed by General Manager Chris Fleischman (he collaborated with Kevin Naderi at Lillo & Ella and brings a hotel-minded approach due to his former background at the Fairmont). In a former life, the early 19th-century bar could be found on a Wells Fargo saloon train car but has been part of the building for decades. Full of character and history, old meets new via the white Carrera countertop – a change that makes the counter more conducive to dining and also creates a stunning focal point. Though the liquor list will include an emphasis on U.S.-made items especially whiskey, bourbon, and gin, both the wine and beer lists will be 100% American. Expect to see Herman Marshall Texas Whiskey (Rye and Single Malt), Balcones Baby Blue Corn Whiskey, Colonel E.H. Taylor Small Batch Bourbon, Lairds Apple Jack, Fernet Leopold Highland Amaro, Leopold Michigan Tart Cherry Liqueur, Bluecoat Gin, Aviation Gin, and Railean Rum (plus many more) alongside non-traditional US wine varietals like Marsanne, Dolcetto, and Gewürztraminer; an ever-evolving list will start with 20 selections by the glass and 100 by the bottle. Special collaborative dinners are in the works with winemakers, brewers, farms, and ranches to highlight relationships built over the past few decades. "I think that if you show people how passionate you are about the product that you took the effort to both source, cook, and/or distill, and/or brew and put it in front of them they go 'They care about what they do, where the product came from'," says Ross. [And] 'If they care about what they do I care about eating it.' It's not a press thing, it's just a real thing. We talk about watchwords [like] sincerity, genuine, authenticity. Those can be real things. They don't just have to be buzzwords."

An eclectic and exciting cocktail menu will round out the bar offerings developed in part by Sandalio, who Ross refers to as his "triple threat" thanks to Sandalio's extensive experience, incredible skill, and boundary-pushing creativity. Besides the aforementioned Peach Old Fashioned, another drink, the Beatnik, is also in the works – a play on a traditional bramble but made with crushed ice, lemon juice, gin, and beets, plus a kumquat and lime Caipirinha. Edible Earth Resources built and planted three herb gardens on the front patio that will provide a generous assortment of mints, thymes, and other green accouterments to the food and cocktail menus. 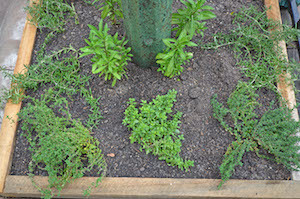 Interior-speaking, the space exudes mid-century American flair with a subtle nod to historical greats like Houstonian Howard Hughes and the excitement and intrigue they represent. The effect is the result of collaborations between Roberto Cervantes from ARCHI-ARTS, General Contractor James Montgomery, and Team PAX-AM. Dark wood and leather furniture set a somewhat formal tone and propeller-inspired ceiling fans gently draw out the mid-40s underlying décor. Pottery made by local artist Steve Campbell from Three Dot Pots will be used to serve and showcase a variety of dishes, both sweet and savory. Playful touches including a "Wall of Weird" on which employees will have their own cubbies to display their wine and vinyl of choice, and hand-drawn chalk art by local artist Sara Hinkle balance the mood and instill a sense of creativity. A large cut steel art piece made by Yarn Irons in Brookshire and shaped like the United States adorns one wall; it will be used to show diners where various menu items have been sourced – a wine bottle may be stuck onto California, for example, or a hog on Texas. Ross wants guests to have fun while fueling them with a sense of belonging and community.