A Chat with Ronnie Killen On 38 Years of Cooking Meat

Share All sharing options for: A Chat with Ronnie Killen On 38 Years of Cooking Meat

It's a sign of respect and a tribute to the great food that die-hard Inner Loopers routinely flock down to Pearland for Ronnie Killen's steaks (Killen's Steakhouse) and, more recently, barbecue (Killen's Barbecue). The 47-year-old chef and restaurateur speaks candidly about his love of meat and how he's made it his life's work.

First, everyone's talking about Killen's Barbecue. How's that going?
It's crazy. It seems like the last four months have gone by really fast – we've been open four months and three weeks – and it's been crazy, crazy busy. We knew we'd be busy because we did so well with the pop-ups, but we had no idea we'd be that busy! The numbers are close to what we're doing in the steakhouse, and that's an average of $85 per person. So it's a little insane. 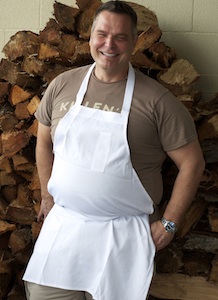 Your mainstay is meat, let's face it. But you have a classical French training in cuisine. How'd you gravitate to this kind of food and what is it that you love about it?
It must be the Texas boy in me coming out! Yeah, I started in 1991. And this is a beef state. I kind of feel like this is what I do well. I am a graduate of Le Cordon Bleu in Paris, but you know, the French don't train much on beef. It's very much fish or fowl or poultry. I've been cooking since I was eight years old and I've probably been doing beef in some way since I was 10. My grandfather, my father, we have these Czech, Boehmian roots. I've been cooking our family meals since I was in high school. Over the years, my technique has changed. Back then, people liked the beef well done, but as I started understanding beef, and wanting to glorify the cow a little, I felt like, "We don't need to kill this animal twice." So, I started teaching myself about beef's own juices and flavor and started making it a lot less well done. Culinary school really made me appreciate the fact that my mom's steaks were really dry and you needed A1 sauce to give them flavor and taste better. She means well, though.

What do you think makes barbecue so special?
To me, I think, it's because it's hard. You only have one chance to make it perfect, you know? If you undercook a steak, you can throw it on the grill for a little longer. Or if you screw it up, you can grab another steak and start again. But with brisket, say, it takes a long time to do. We cook our brisket for 16 hours, so if you mess that up, you don't get a second chance. Same thing with our beef ribs, which we do for 10 hours. Barbecue is a feel, there's a way it works. We don't puncture the meat to see if it's done. When you do that, you lose moisture and juice. So, you have to know what you're doing and determine how it's going by feel and by smell, and just what you've learned over the years. There's a lot of mediocre barbecue out there. And barbecue is such a part of Texas, you wind up being judged. It's very tough.

But you're still doing it.
Because it's something I really enjoy. I think I have it down pretty good and I think people must agree because we're so busy. But it's really rewarding when I hear someone say, "That's the best barbecue I've ever had," and that person is like, 70. I mean, think how much barbecue he's eaten in his life, right? That's what I am trying to set up here, this place where you'll remember our food. I have so many great childhood memories of barbecue and I think a lot of other people do, too. That's special to me.

What do you think is your secret, or how do you approach this that's different from someone else?
It must be the chef in me – or the training I had from the Ritz Carlton, where you want every experience to be perfect for the guest and you do whatever it takes to make it that way. I get excited when I make steak, and I'm so happy when I make good barbecue – because it's so much harder. But we start with quality product. Our beef is among the top 3% of USDA beef. And we use salt and pepper for seasoning and that's it. I tell our team, "It's only bad if we screw it up," because we have great beef to begin with. You know, you think of barbecue sometimes as peasant food. You grab a piece of meat, you throw it on the pit and you cook it. And you might do it with a cheap piece of meat because it's all you can afford. I know what that's like. I was poor back in 1991. I bought cheap. But now, I can get a better product from the start. And I understand about rendering fat and marbling, and I think it shows in the products we put out in both the steakhouse and the barbecue. I'm always striving to be better. But it's like these T-shirts we sell say: It's all about the meat.

-Holly Beretto
· All Other The Five Days of Meat Coverage [-EHOU-]