One Week In at True Food Kitchen On Post Oak

When Phoenix-based Fox Restaurant Concepts' True Food Kitchen, the healthy fare eatery backed by eating-right guru Dr. Andrew Weil, opened last week, there were early reports of the place being packed. At its pre-opening media dinners, our writer liked the onion tart and the casual vibe. One week later, the simple food space is going strong. Fox Restaurant Concepts Vice President of Operations Mike Wilcox sat down with us to bring us up to speed on TFK's entry into the Bayou City and what its early success means for future Houston endeavors.

We heard a story there was about a half-hour wait for dinner last Friday night, and pre-opening weekend, every table was full. Were you surprised by the early success?
Whenever we go into a new market, we always hold our breath a little because you never know what to expect. But here in Houston, wow, we were very pleasantly surprised. It's been awesome.

Of course you wouldn't have come into the market if you didn't think Houstonians would be receptive. Tell us a little about who you're seeing in the space, and what you think makes the concept a great fit here.
Part of the excitement and success now is, I'm sure, because we're the first tenant to open in Phase II of BLVD Place. And it's really nice to be so busy so soon. Before we came into Houston I recall reading that the city has the most restaurants per capita than any U.S. city, so it's obvious people here love dining out. But the location we chose was key, too. Because over in the Galleria there is so much foot traffic. And our diners are, typically, very active, the kind of people who want to improve themselves and care about their bodies, both in terms of being healthy an in eating healthy. So, both of those factors were a big draw for us to the Houston market and that space in particular. 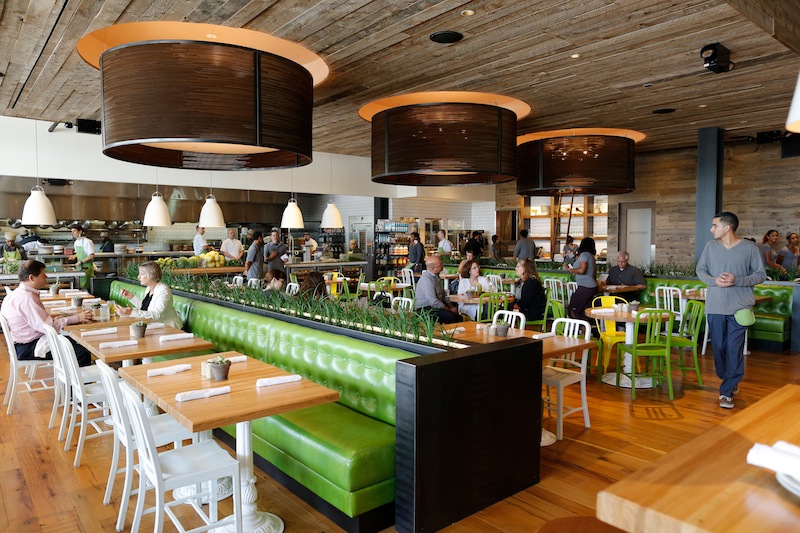 You've added some items to the menu that are specific to Houston. What are they, and how have they been received?
We put in a kale and avocado dip, that's done with grapefruit juice and poblano chilies and we serve it with our black seed chips. Our summer salad is a green papaya and kelp noodle salad, and then we changed up the chicken dish. Usually we do a roasted half chicken, but here we did tandoori-style chicken kabobs. The salad has been really well received. It's vegan (many of our dishes are vegetarian, but not all are vegan), so that's been great. But I like it with some chicken or shrimp on top, so it's really easy to add in a protein to it. The kale dip has become one of the best-selling appetizers so far. But the chicken kabob is probably the most popular. People are loving Indian food now, and this is really easy to enjoy. It's also a lighter dish than the half-roasted chicken.

Your concept is also enjoying an ongoing moment right now, as more and more people express an interest in healthier eating, in having foods that are GMO-free, in eating local. How has that trend helped grow your brand?
We're in nine locations nationwide and we've been open for six years, but for us, it wasn't, "Let's do a health food restaurant, where everything is good for you but it tastes like cardboard." It was about using great food to make great-tasting food. We didn't devise the menu and say, "Oh, we need more gluten free or more vegetarian." We just looked for great taste. And the way you get that is to use items that are as local as possible and in season. Right now, what's in season is just insane. And our chefs have the autonomy to go to local farmers markets and purchase what they think will work for our menu, so maybe right now they're buying heirloom tomatoes at the markets and using them in our salads. We look to have a good balance of items on the menu, but we want all of them to be fresh.

So, what do you say to people who might look at your space and think, "Another health food place," and figure they're going to one of those places where you're promoting healthy eating but the food does taste, like you were joking, like cardboard? We don't have too much of that, because we've found that when people come in, they're really surprised. An example would be if one of our diners is a vegan woman and she's going out to dinner with her non-vegan husband. We have bison burgers and steak tacos on the menu. And that's not what people think of when they think "health food." But it all tastes great, and that's what keeps people coming back.

And they are coming back.
I've never seen this high a frequency of repeat guests. I've been in the restaurant industry for a long time, and people coming into True Food Kitchen often are coming in five days a week, sometimes even multiple times a day. I think people are hungry for good food that adds to a healthy lifestyle.

So, what's next? Will there be more True Food Kitchens in Houston?
While we were here for the opening, we went up an looked around The Woodlands, and that was awesome. That center is really busy and there are a lot of businesses there that hit the same demographic that we do, the Apple stores buyers and Lulumon shoppers of the world. It's also growing, with Exxon's new headquarters to be there. But we haven't made any decisions on where we'll go next.
-Holly Beretto
· True Food Kitchen [Official Site]
· All Other Eater Interviews [-EHOU-]
· All Other Opening Reports [-EHOU-]