Where to Eat and Drink in Houston’s Heights

Where to Get Your Gumbo Fix in Houston

Where to Eat On The Road in Eater Texas

Share All sharing options for: Where to Eat On The Road in Eater Texas

Share All sharing options for: Where to Eat On The Road in Eater Texas 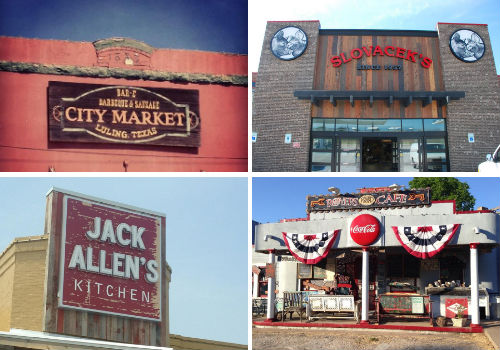 Summer is nearly upon us, and for many folks that means road tripping. Whether you're making the trek to visit family or friends or just feel like getting the hell out of Houston, your caravan will inevitably need to make a few pitstops on the way — luckily, we've collaborated with Eater Austin and Eater Dallas to compile a massive guide to the best roadside eats between the three cities. Like last time, old standbys like kolache haven Czech Stop, barbecue mecca City Market and Buc-ee's are included along with plenty of new additions such as a barbecue joint at a Baptist church and even a little farm-to-table cuisine.

Got a favorite roadside destination that's not on the map? Do chime in via the comments.


Read More
If you buy something or book a reservation from an Eater link, Vox Media may earn a commission. See our ethics policy.

Copy Link
This old-school, no-frills burger joint has plenty of character and some pretty great road trip burgers. Patties are quite thin, so opt for the double or triple; no fries here, but you'll definitely want to get a fried pie and a glass bottle Coke. [Photo: Steve S./Foursquare]
403 Water St, Waxahachie, TX 75165
Visit Website

Copy Link
If you're on your way out of Dallas and want a hearty meal that'll do your meat-cravings right, look no further than Bubba's, the easiest highway-accessible barbecue in the area.
North Interstate Highway 45, Ennis, TX 75119

Copy Link
It's fairly slim pickins for good food between Dallas and Houston, so a stop at Woody's is always appreciated. Carnivores will find plenty to eat at this glorified convenience store, including barbecue (get the beef ribs), venison sausage and an impressive selection of jerky (ask for samples), but there's also sandwiches including a grilled trout burger, homemade fudge, jams and preserves. [Photo: Tim B./Foursquare]
947 W St. Mary's St, Centerville, TX 75833
(903) 536-9663
(903) 536-9663

Copy Link
This rickety little barbecue shack is operated by the Baptist church next door and has been smoking brisket, ribs, chicken and sausage for nearly 40 years now. While the meats aren't exactly mind-blowing, this unique destination is certainly worth the side trip for the atmosphere alone. (Closed Sunday, because duh.) [Photo: Andrew K./Foursquare]
2601 Montgomery Rd, Huntsville, TX 77340
(936) 295-3445
(936) 295-3445

Copy Link
Need a bite and can't wait till you get to Houston? Stop by this gyro stand located in a used car lot (really) for homemade hummus with pita and gyro sandwiches piled high with meat.
8975 Highway 242, Conroe, TX 77385

Copy Link
There's a new Buc-ee's in Texas City, just off I-45 South. And it's massive. The 60,000-square-foot space welcomed hundreds of new customers on it's opening day just a few weeks ago. It's a good spot to carb load in between shopping, since it's near Tanger Outlet Mall.
6201 Gulf Freeway, Texas City, TX 77591

Copy Link
A steakhouse and bar on the side of Highway 6 in Navasota, Wrangler is a haven for road trippers making the trek from College Station. Get the absurdly large "small" chicken-fried steak and the Diablos on Horseback, bacon and jalapeno-wrapped shrimp with spicy cocktail sauce. Also: free wi-fi, and there's a smoking section.
8731 Highway 6, Navasota, TX 77868
(936) 870-3401
(936) 870-3401

Copy Link
In the morning, travelers stop for Chappel Hill's first-class kolaches. Later in the day, it's all about the barbecue and giant baked potatoes loaded up with meat. Either way, the huge Blue Bell selection is always a good idea, and you can grab a bottle of jalapeno ketchup as a take-home souvenir.
8900 Highway 290 E, Chappell Hill, TX 77426
(979) 836-0910
(979) 836-0910
Visit Website

Copy Link
This quaint little steakhouse has a huge menu with everything from chicken and dumplings to ribeye nachos, but the specialty is Texas-bred Akaushi steaks -- what more do you need to know? Oh yeah, there's also a full bar where you might even catch some karaoke action. [Photo: Chris A./Foursquare]
101 Moore Ave., Moulton, TX 77975
(361) 596-7323
(361) 596-7323
Visit Website

Copy Link
This is the biggest convenience store IN THE WORLD. The bathrooms are spacious and pristine. Grab an armload of their near-infinite varieties of beef jerky, hard candies and pickled items -- don't miss the signature Beaver Nuggets.
2760 South Interstate 35, New Braunfels, TX 78130
(979) 238-6390
(979) 238-6390
Visit Website

Copy Link
The Cooper's outpost in New Braunfels describes itself as a "carbon-copy of the mothership Llano restaurant," meaning you can get some of Texas finest smoked meats without an hour's detour off I-35.
1125 Route 337 Loop, New Braunfels, TX 78130

Copy Link
The Grist Mill serves up generously portioned all-American fare -- think burgers, ribs, and steak, plus killer giant onion rings -- in a historic old building that was once the boiler room of a cotton mill. The food is hardly revelatory, but it's perched on the banks of the Guadalupe so the patio views are oh-so-picturesque.
1287 Gruene Rd, Gruene, TX 78130
(830) 625-0684
(830) 625-0684
Visit Website

Copy Link
If you're needing something a little more rib-sticking than a bag of jerky, stop at the historic Stagecoach Inn, just like Jesse James did. Think prime rib or chicken-fried steak, both of which come accompanied by rolls, a vegetable, a potato, iced tea and coffee.
401 North Main Street, Salado, TX 76571
Visit Website

Copy Link
The Elite Cafe (or whatever it's calling itself post-remodel) isn't fine dining, but eating Elvis' beloved toasted peanut butter and banana sandwich in the same place he used to is a "do at least once" kind of event. Fair warning: So is mastering that traffic circle out front.
2132 South Valley Mills Drive, Waco, TX 76706
(254) 754-4941
(254) 754-4941
Visit Website

Copy Link
There are two things you should consider in addition to Michna's badass link sausage: Frito pie and butter beans (not necessarily together). Also, if for some reason you need to cater a banquet while you're stopping through, they've got you covered.
2803 Franklin Avenue, Waco, TX 76710
Visit Website

Copy Link
Slovacek's is a gas station, but it's also so much more than that: There's a bakery with house-baked kolaches and pies, a frozen yogurt bar, a meat counter, a beer cave (don't get too excited, it's just a walk-in beer cooler), and even a dog park for your four-legged road trip companions. Stop by the Kissing Pig Cafe for a deli sandwich, including an awesome grilled cheese with fontina and garlic aioli or a Reuben on marbled rye.
Interstate 35 Frontage Road, West, TX 76691
(254) 826-4525
(254) 826-4525
Visit Website